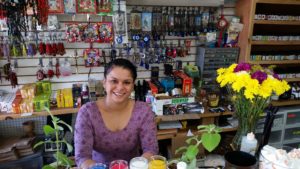 STROUDSBURG – The man knew what he wanted, walked to a side wall in the store and took down a thick candle the color of a pumpkin.  On its wrapper was a drawing of bundles of money piled in front of a sack labeled with a dollar sign.

Moments later, a husband and wife entered to buy some roots, a pack of incense sticks and a bottle of sugarcane juice.

All transactions at the checkout counter were conducted in the Spanish language.  It was a Saturday afternoon in Botanica 21 Division, at 1610 N. 9th St.

And the sugarcane juice bought by the spouses?  “It’s to sweeten up, especially for love, you know?” Miranda said.

The botanica, or spiritual store, is named after Las 21 Divisiones, a religion from the Dominican Republic that contains elements of the Catholicism brought to the New World by Spaniards, the religions of African slaves and the beliefs of some Caribbean indigenous peoples.

Botanica 21 Division is owned by Sonia Ceballos.  A native of the Dominican Republic, she also provides spiritual readings in a small room at the back of the store.  She opened the business nearly five years ago.

“I have people that come from one or two hours away,” Ceballos said.  “From New York City.  Long Island.  Connecticut.”

The candles, herbs, cleaners, colognes, powders, statuary and other products sold in the store are to provide protection, enhance love, luck and other benefits to adherents of Las 21 Divisiones.

Horseshoes and railroad spikes were for sale, displayed inside buckets near the front window.

“Those are used for other things,” Miranda said.  “If you want to do a love spell.  If you’re buying property, or for other rituals.”

A statue of St. Michael the Archangel, priced at $6, was on sale near representations of other saints.  In Las 21 Divisiones, the saint is named Belie Belcan.

Creolin, a disinfectant made with coal tar and sold in packaging that looks unchanged from the 1950s, is stocked near bottles of coconut oil and selections of turpentine from the Dominican Republic.  There are soaps made from honey and soaps created from extracts of the guava plant.

“When you want to clean your house because you feel there’s a lot of negative energy there, you use something like these,” Miranda said.

Customers, according to the owner, are mainly émigrés from the Caribbean, and African Americans.

Followers of Santeria, another religion influenced by Christianity, and the beliefs of slaves and natives, also shop at Botanica 21 Division.  Many of them are Cuban Americans, Ceballos said.

“A lot of people come here for protection against envy,” Miranda added.

The money she makes from sales of store merchandise and providing readings are Ceballos’ only means of support.

“These stores, they take up all my time,” she said.  Assorted friends and family help her staff the Stroudsburg and Scranton outlets.

Miranda acts as the chief buyer for both locations, and has traveled as far west as Los Angeles in search of merchandise.  He gets many of the products from specialty distributors in New York City.

Ceballos said business remains steady and most sales are made to a core of repeat customers.  She often wonders why new patrons do not appear with more regularity.

The world is seemingly full of awful news, delivered continuously on smart phones and other digital platforms.  Ceballos once believed depressing events, including terrorism, military tensions, new countries adding nuclear weapons to their arsenals and alarming medical issues such as the Zika virus would have strengthened the religious convictions of most communities.

She blames Facebook, Twitter, Instagram and other online activities that are delivered in short bursts.  These, she feels, make it hard for many people to commit to the introspection necessary to appreciate Las 21 Divisiones and other religions.

“People still come here,” Miranda said.  “But they don’t follow up on their religion the way that my grandma used to, and my mother used to.  It doesn’t happen that way anymore.”