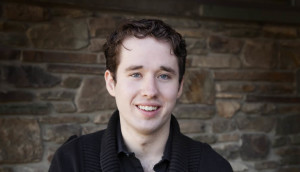 The Greater Scranton Chamber of Commerce announced today that Scranton Fringe Festival co-founder and past SAGE Award recipient Conor O’Brien was selected as the emcee for the 2015 Chamber Gala and SAGE Award presentation, which will be held on Wednesday, Nov. 11, from 5:30-9 p.m., at the Theater at Lackawanna College.

O’Brien is known locally as an actor, playwright and arts professional. He received the 2011 SAGE Award for Young Entrepreneur of the Year for his work with The Vintage, a performing arts space in Downtown Scranton that operated from January 2009 through September 2014. O’Brien is also the co-founder and current executive director of the Scranton Fringe Festival, which celebrated its inaugural year in 2015.

“To be a part of this year’s SAGE Awards as host is a real pleasure,” O’Brien said. “I am incredibly proud of this region and I am incredibly grateful to all the individuals and businesses that have afforded me so many opportunities, so any way I can be a part of a celebration of this community is really exciting.”

O’Brien also won the Pittsburgh Fringe Festival’s 2014 award for best actor for his role in “The Darling Core,” which he also co-wrote. He will reprise his role in 2016 when “The Darling Core” debuts in New York City. He has also performed in Philadelphia, Kansas City and throughout the northeast Pennsylvania region.

Tickets for this year’s Chamber Gala are available through Monday, Nov. 9, at www.scrantonchamber.com. For more information on the event, call (570) 342-7711.

About The Greater Scranton Chamber of Commerce
The Greater Scranton Chamber of Commerce is a not-for-profit organization that works to improve the area’s economic environment and quality of life by providing programs and services which stimulate economic growth, promote business prosperity and nurture educational opportunities. For more information about the Chamber, visit www.scrantonchamber.com.