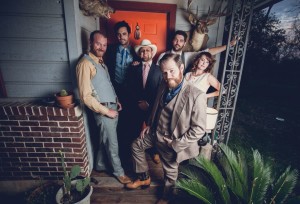 Get ready! Sour Bridge is coming to town! On Friday, June 26th, local boys, Matt and Bill Pucci and their band Sour Bridges will return to The Cooperage, 1030 Main Street in Honesdale.  Doors open at 6:30pm and the music starts at 7:30pm.  There will be a cash bar, so please do not BYOB.

Founded in 2009, Sour Bridges was established early on as a fixture in Austin’s finest venues, no small feat in a town bursting with musicians.  The Austin, Texas based band has nailed a reputation as the region’s premiere indie-bluegrass band.  Sour Bridges has continued its rise, earning regional airplay and notable appearances at roots music festivals like UTOPiAfest, SXSW and more.

Sour Bridges celebrates its third studio release, Sour Bridges (May 12, 2015). Highlights include “Dirt Poor,” “Fine Life,” and the uplifting “Carry On.” Previous albums include Catfish Charlie (2013) and the group’s 2010 debut, Workin’ On Leavin’. In its music and its live shows, Sour Bridges members’ genuine love for playing and singing together comes through loud and clear.

Don’t miss this special night. Help us give the Pucci boys a warm welcome home! There will be chairs around the room for the listening crowd, but most of the floor space is reserved for a footloose hootenanny! The show starts at 7:30pm, doors open at 6:30pm.  Remember, CASH BAR, please do not BYOB.  Donations collected at the door.

The Cooperage is operated by the The Cooperage Project, a not-for-profit organization that seeks to build community through performance, learning and good times. For more information visit www.thecooperageproject.org or call 570.253.2020.

donations collected at the door