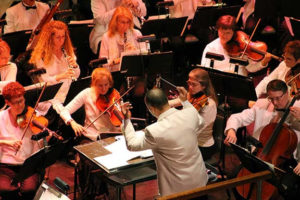 WILKES-BARRE, PA (September 12, 2016) Bringing their irresistible, toe-tapping, finger snapping and popular works to the Keystone Grand Ballroom, the NEPA Philharmonic will be presenting their PNC Pops Series consisting of three shows over the next few months. This season, their Pops series will take you on a journey from great movie themes, through the bright lights of Broadway and to Jazz clubs of the swing era. The NEPA Philharmonic celebrates Classical Orchestral music’s relevance to Pop culture, and truly enriches and engages the audience with their artistic excellence.

On Saturday, October 8th, join us for a Wicked-good evening of Diva showstoppers from the world of Broadway, Opera and Pop! The evening will feature Elphaba and Glinda from the Tony Award-winning production of Wicked. In addition to the untold tale of the witches of Oz, the program includes favorites from Gypsy, Ragtime, Titanic and Carmen. You’re sure to love their bewitching and bedazzling performance! Guest artists include Julia Murney and Emily Rozek, and doors will open at 7:00pm, with the first series performance beginning at 8:00pm.

A Night At The Oscars – PNC Pops II

As Hollywood prepares for the annual Academy Awards, join the NEPA Philharmonic in celebrating past Oscar-winning movies and scores. From John Williams to John Barry, you’ll hear unforgettable music from films like Titanic, Gone With the Wind, Schindler’s List, The Godfather, Out of Africa, Star Wars and more! Maestro Loh and the Philharmonic musicians will bring their flair to some of the most cherished and honored movie scores. This second series performance will take place on Saturday, February 4th at 8:00pm.

On Saturday, April 1st at 8:00pm, the third and final series, The Piano Men, will rock the night away to the epic music of Billy Joel and Elton John! The Philharmonic, and the Rock group Piano Men, will join forces to give you the songs of Billy and Elton in full symphonic glory. Guest artist, Joe Boucher, and his group will perform such favorites as: Allentown, Don’t Go Breaking My Heart, Goodbye Yellow Brick Road, Rocket Man and New York State of Mind. The wow factor or this concert is off the charts!

*All show tickets are currently on sale now through the NEPA Philharmonic website.

Mohegan Sun Pocono, owned by the Mohegan Tribe of Indians of Connecticut, is one of the most distinctive and spectacular entertainment, gaming, shopping and dining destinations in Pennsylvania. Situated on 400 acres in Plains, Pennsylvania, Mohegan Sun Pocono features a 238-room hotel with on-site spa and adjacent 20,000 square-foot Convention Center. It is currently home to 82,000 square feet of gaming space including 91 live table games, 2,300 slot machines and electronic table games, a variety of dining and shopping options, nightlife, entertainment and live harness racing. Mohegan Sun Pocono is within easy access of New York, Philadelphia, New Jersey and Delaware. More information is available by calling 1.888.WIN.IN.PA (1.888.946.4672) or visiting our website. Connect with us on Facebook, follow us on Twitter or Instagram, download our app and view us on YouTube.