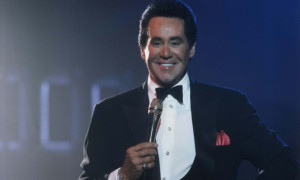 WILKES-BARRE, PA (August 24, 2015) – One of the best-known entertainers in the world, Wayne Newton, brings his incredible talent and showmanship to Mohegan Sun Pocono’s Keystone Grand Ballroom on Saturday, November 7th at 8:00pm.

Tickets for this show will go on sale on Friday, August 28th for $80.00, $50.00 and $30.00 through Ticketmaster. Customers may purchase tickets by logging on to ticketmaster.com, calling Ticketmaster’s national toll free Charge By Phone number 1.800.745.3000 or visiting any Ticketmaster outlet. Tickets are also available, free of service fees, at the Mohegan Sun Pocono Box Office.

With a career lasting over seventy years and 165 albums, Wayne is a favorite among his legion of fans and is one of the most widely acclaimed and honored entertainers in history. He has performed all over the world to more than 40 million people with hits like “Heart,” “Danke Schoen,” “Red Roses for a Blue Lady,” “Summer Wind” and “Dreams of the Everyday Housewife.”

Wayne had many mentors in the early years of his career, including Jackie Gleason, Lucille Ball, Danny Thomas, George Burns and Jack Benny. After working as an opening act for Jack Benny in Las Vegas, Wayne was awarded the opportunity to headline his own show, and broke the hotel’s attendance records beginning opening night. He has since been synonymous with Las Vegas and is often called “Mr. Las Vegas.” Wayne was also bestowed the first star on the Las Vegas Walk of Fame in 2004.

In addition to bringing his charisma and talent to over 25,000 audiences in Las Vegas, Wayne has had a successful career on the big screen including hits such as “Vegas Vacation,” “Ocean’s Eleven,” “License To Kill” and more. His television acting credits include “Bonanza,” NBC’s “Las Vegas,” “According to Jim,” “Kingdom Hospital,” the ABC miniseries “North and South, Book II,” “Roseanne,” “Ellen,” “My Wife and Kids,” “The Fresh Prince of Bel Air,” “Renegade,” “Perfect Strangers,” “LA Law,” and the HBO series “Tales from the Crypt.” In addition, he starred in the highly rated “Wayne Newton’s Las Vegas,” on the Travel Channel, has been the focus of the highly acclaimed series “A&E Biography” and featured on the “E! True Hollywood Story.” Wayne’s Las Vegas ranch was also featured in an episode of MTV “Cribs” and on VH-1’s “Celebrity Pets 1 & 2.”

Wayne’s patriotism runs deep, and he has entertained troops in every major confrontation since the Vietnam War. In 2000, Bob Hope and the USO named him the “Chairman of the USO Celebrity Circle,” and from 2001 through 2004 he took 16 USO tours overseas.

ABOUT MOHEGAN SUN POCONO:
Mohegan Sun Pocono, owned by the Mohegan Tribe of Indians of Connecticut, is one of the most distinctive and spectacular entertainment, gaming, shopping and dining destinations in Pennsylvania. Situated on 400 acres in Plains, Pennsylvania, Mohegan Sun Pocono features a 238-room hotel with on-site spa and adjacent 20,000 square-foot Convention Center. It is currently home to 82,000 square feet of gaming space including 91 live table games, 2,300 slot machines and electronic table games, a variety of dining and shopping options, nightlife, entertainment and live harness racing. Mohegan Sun Pocono is within easy access of New York, Philadelphia, New Jersey and Delaware. More information is available by calling 1.888.WIN.IN.PA (1.888.946.4672) or visiting our website. Connect with us on Facebook, follow us on Twitter, download our app and view us on YouTube.