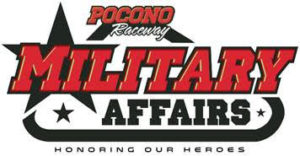 o   The Golden Knights will host a meet-and-greet at the Pocono Raceway Fan Welcome Center in Fan Fair on Saturday at 10 a.m.

o   The Golden Knights will perform a skydiving demonstration during the National Anthem, prior to the Pocono 400, on Sunday.

o   The United States Marine Drum and Bugle Corps will perform the “The Star-Spangled Banner” before Sunday’s Pocono 400.

o   200+ new recruits, enlisting in several branches of the military, will receive their Oath of Enlistment prior to the race on Sunday.

o   The ceremony will be led by Lt. Gen. Rudder and is expected to be one of the largest ceremonies ever held at a sporting event.

o   Pocono Raceway will dedicate a plaque to the Gold Star / Families of the Fallen at the Flag Pole located outside Gate 8 and near the main entrance to Fan Fair, on Sunday at 11:10 a.m.

o   The event will be attended by several branches of the military, Pocono Raceway representatives, the Union League of Philadelphia and family members of Gold Star Mothers.

o   Nearly 200 Gold Star Mothers and Families of the Fallen have been invited as guests of Pocono Raceway to the Pocono 400.

o   The Commander of the Tobyhanna Army Depot will present an award to recognize the warrior who has gone above and beyond the call of duty in the local community. This will take place prior to Driver Introductions on the stage near the Start/Finish line on Sunday.

o   Military and Pocono Raceway representatives will gather at the Chair of Honor located in the ADA section of the Grandstand prior to pre-race activities on Sunday. The Honor Guard will place the seat in the upright position as a symbol of recognition to honor POW/MIA.

Pocono Raceway is also excited to reveal their new Department of Military Affairs logo. This logo was created by Daniel Devito following a fan-submission logo contest. Devito’s logo will be used by the Military Affairs Department, led by Raceway Vice President Bob Pallo. For more information about the department, please visit www.poconoraceway.com/militaryaffairs.

Pocono Raceway is a proud supporter of the Armed Forces. Active and retired military members can take advantage of Pocono Raceway’s excusive military discount through their partnership with ID.me. Once members are verified through ID.me, they will receive discounts on Pocono Raceway event tickets and tons of other great offers, discounts and coupons from some of the top names, brands and venues in the country. For more details, visit www.poconoraceway.com/militarydiscount.

All of the military-focused events taking place during the Pocono 400 weekend support NASCAR’s annual NASCAR Salutes Refreshed by Coca-Cola program, a collective expression of reverence, respect and gratitude for those who served and continue to defend America today. For more information, please visit www.nascar.com/salutes. 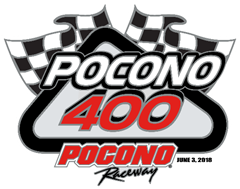 Pocono Raceway, also known as ‘The Tricky Triangle,’ is family-owned and situated in the beautiful Pocono Mountains of Pennsylvania. In business for over 50 years, the Raceway hosts multiple, national motorsports events, including two Monster Energy NASCAR Cup Series races, one Verizon IndyCar Series, one NASCAR Xfinity Series, one NASCAR Camping World Truck Series and two ARCA Racing Series Presented by Menards events each year. The Raceway has added multiple, adventure-running series events to its annual calendar, including the Warrior Dash. Pocono Raceway is recognized as the world’s first privately-owned solar-powered sports facility.  Its 25-acre, three-megawatt solar farm provides the energy needs of the Raceway, as well as adds electricity to the local power grid. Each member of our Raceway staff is committed to creating exciting experiences and lifelong memories.