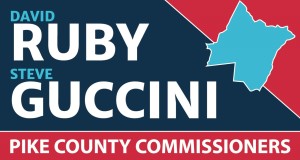 David E. Ruby and Steven R. Guccini, Democratic candidates for the office of Pike County Commissioner in the 2015 general election, have accepted an invitation from the Pike County Member-at-Large (MAL) Chapter of the League of Women Voters to participate in a public forum on Monday, October 19 at 7:00 PM at the Dingman Delaware Middle School Auditorium in Dingmans Ferry.

In a joint statement the candidates said, “More transparency is needed in Pike County government, and we are looking forward to this opportunity to answer questions from the public about our campaign platform and qualifications. We are grateful to the League of Women Voters for this opportunity.”

From the start, Team Ruby + Guccini have outlined very specific goals and ideas for their campaign and what they would like to accomplish as Commissioners. These include:

•    Holding Commissioners meetings in all areas of Pike County: Currently, the Commissioners meet on Wednesday mornings in Milford, severely limiting attendance and citizen participation. The candidates pledge to have at least 2 meetings per month in the evenings, in different townships and on a rotating basis.

•    Non-partisan hiring practices: The candidates believe party affiliation has all too often influenced Commissioners’ county appointments—and they pledge to make all hiring decisions based on integrity, experience and competence, regardless of a potential employee’s party affiliation.

•    Self-imposed term limits: In the interest of continually bringing in new people and new ideas, both candidates will seek no more than 2 terms.

Ruby, a Milford resident, has long been a passionate force and advocate for the good of his community, bringing to the ticket nearly 40 years of local business experience and highly active involvement in the Milford Fire Department (previously President and Treasurer), Dingman Township Planning Board, and Pennsylvania State Police Troop R Camp Cadet (Board Director). Past area civic and non-profit experience also includes member of the Milford Borough Council, treasurer for Pike County 4H, the Pike County Economic Development Corporation and board member of Center for Developmental Disabilities (CDD).

Ruby grew up spending weekends and summers with his family in Pike County, and has been a full-time resident since 1976. He has been an Associate Agent and registered Financial Representative with Nationwide Insurance for the past 23 years. He is also a commercial real estate developer, actively managing several commercial office buildings in Milford Township.

“My civic involvement in emergency services and other non-profit work has afforded me the opportunity to make a real contribution to the community I live in, and it’s given me a strong understanding of the true concerns and needs of our area,” says Ruby. “Using the strong business sense and the good common sense I’ve always brought to the table, I am driven and committed to creating positive growth in Pike County, the area that I have lived in for most of my life.”

Ruby holds a B.S. in Management/Marketing from Syracuse University and a Masters in Higher Education Administration from Indiana University. He resides in Milford with his wife, Maryann Ruby, who has successfully operated fitness businesses locally and currently operates Milford Pilates in Milford Township. His two children, Michael and Rebecca, were born and raised in Milford, and educated in the Delaware Valley School District. He also has three grandchildren.

Guccini, a Greentown area resident, brings a lifelong commitment to Pike County and the welfare of its residents. A highly respected and accomplished attorney, Guccini has operated his private practice in the Hawley area since 1984, and served 12 years as an Assistant District Attorney for Pike County, where he headed the Child Abuse Task Force. He was also an Assistant Public Defender for 2 years.

Deeply committed to children’s issues, Guccini represented Pike County Children and Youth Services for 4 years and has been acting as a guardian for abused and neglected children for a decade. He is also a member and was the initial chairman of the Northeast Citizens Review Panel, a 12-county association that aims to improve the policies and procedures of Pennsylvania’s child welfare system.

“I have seen our government up close from my 35 years as a lawyer in the County. What we need is a healthy dose of independent professionalism, bringing with it new ideas and solutions that reach our businesses and residents alike, across the entire County,” says Guccini. “I believe I have the knowledge and experience to take on the job, and I understand what needs to be done in order to include everyone in the process.” 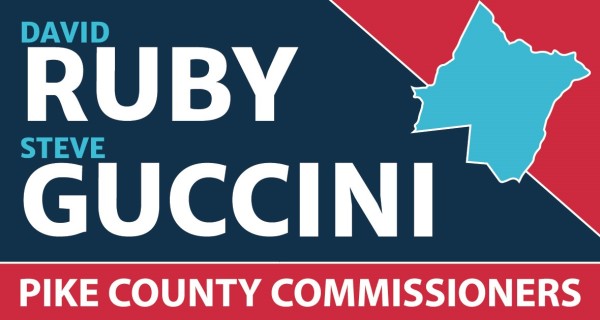