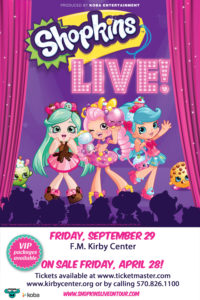 First Ever Theatrical Show Based On #1 Children’s Toy Brand

(Wilkes-Barre – April 18, 2017) – Shopkins Live! (www.shopkinsliveontour.com), the first live theatrical production based on the phenomenally successful Shopkins toy brand, will bring their national tour to The F.M. Kirby Center on Friday, September 29 at 6:30 p.m., it was jointly announced today by Gilles Paquin, President and CEO of Koba Entertainment, and Nicole Hardiman, Senior Licensing Manager at Moose Toys.

Based on America’s #1 toy brand, Youtube sensation and international toy phenomenon created in Australia by Moose Toys,Shopkins Live! will feature The Shoppies and Shopkins characters taking the stage with an all new storyline, original pop music and video highlights as ‘Jessicake’, ‘Bubbleisha’, ‘Peppa-Mint’ and friends prepare for Shopville’s annual “Funtastic Food and Fashion Fair”.

“Shopkins is literally on every child’s wish list,” commented Paquin, who also serves as Executive Producer of Shopkins Live!  “Koba Entertainment’s partnership with an innovative and leading toy manufacturer like Moose Toys allows us to bring one of the most successful toy brands in history to life on stage.”

“We are thrilled to have Koba Entertainment presenting our first-ever live theatrical show for Shopkins,” added Hardiman.  “This will be a fantastic event featuring the Shopkins and Shoppies in an amazing adventure that our North American fans can experience.”

Since its launch in 2014, the Shopkins brand continues to be a hot ticket item for children worldwide.  Shoppies dolls consistently rank as the #1 kids toy in the U.S.; the first-ever Shopkins movie, Shopkins Chef Club, was released last year by Universal Pictures Home Entertainment; and numerous dedicated apps continue to expand the brand’s ever-growing world.

Shopkins Live! will run for approximately 90 minutes, with one 15-minute intermission. For more information on Shopkins Live! visitwww.shopkinsliveontour.com and sign-up to be the first to hear about the pre-sale offer, on-sale dates and North American tour dates.

The Shopkins Live! U.S. tour is represented by APA.

A prominent producer of original family musicals, Koba Entertainment has been captivating audiences around the world with celebrated characters from literature, television, and pop culture since 2004. Koba Entertainment productions have enchanted people of all ages in more than 165 North American cities, 12 countries and 4 continents. Production credits for young audiences include: Bubble Guppies Live! Ready to Rock, Dora the Explorer Live! Search for the City of Lost Toys, Toopy and Binoo: Fun and Games, The Backyardigans: Sea Deep in Adventure, and Max & Ruby in the Nutcracker Suite. 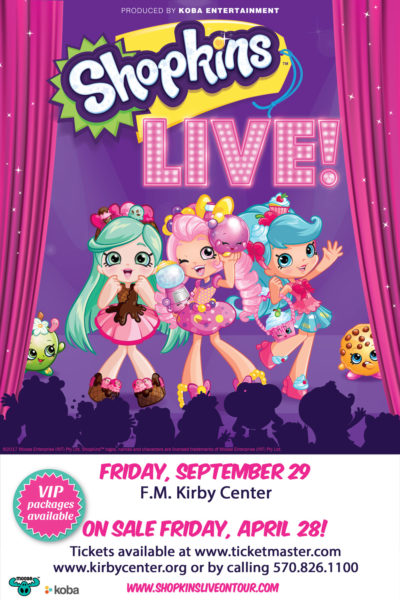 Moose Toys is a global toy company with offices in the US, UK, Hong Kong, China. The head office is in Melbourne, Australia and from there the brand is distributed into over 90 countries. Moose is known for designing, developing and distributing toy and lifestyle products across the globe for children of all ages and the young at heart. The company is the proud recipient of numerous coveted toy awards, including the 2015 and 2016 Girls Toy of the Year for global phenomenon Shopkins. Most recently, Moose took home the Collectable Toy of the Year and Craft Toy of the Year at the 2017 Australian Toy Awards. A total of nearly 120 awards since 1993 solidifying Moose as a market leader, who is consistently placed within the top toy companies in the USA and Australia. Moose has products in all toy categories including collectibles, arts and crafts, activity toys, dolls, novelty items and has recently become a market leader in developing apps, content, and entertainment.