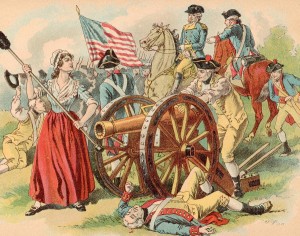 We all know about George Washington, Benjamin Franklin, and John Hancock. They are reminders of how determined we must all be when freedom is put in harm’s way.

I have always wondered about the women of the Revolution. In school all we were taught was that Betsy Ross was known for sewing the American flag. Now, that in itself is a marvelous undertaking. However, there were so many others who we need to know and honor.

So I did some research and felt a swell of pride about the courage and the well…GUTSINESS for so many who risked their lives and did not hold back out of fear. Here are some of our heroines:

Like Deborah Sampson cut her hair, bound her breasts and put on a uniform to fight next to the men.

Like Ann Bates, a Philadelphia school teacher who changed her name and sold supplies to the British as a way to spy on them and bring information back to General Washington’s troops.

Like Nancy Hart. She was known as a woman of fearless spirit and a hot temper. One amazing account of Nancy’s life was the evening that six British soldiers stopped to find a Whig leader. They demanded she cook them dinner and stacked their weapons in a corner. As the soldiers were getting a bit tipsy on wine, Nancy began to pass the muskets through an opening in the cabin wall to her daughter.  When the soldiers noticed what she was doing she picked up one of the guns and warned them she would shoot, which she did. One man was killed and the others kept at bay until her husband and others arrived.

Like Margaret Cochran Corbin who earned the name Captain Molly. When her husband was killed at Fort Washington she took over firing the cannon alone until she was wounded and severely injured.

Like Mercy Otis Warren who wrote the first history of the Revolutionary War. Her capacity to speak out and use the written word in a bold and forceful way is an inspiration to all of us in the 21st Century.

I would like to end this by honoring Abigail Adams who was wise beyond her generation and speaks for women of today:

“If particular care and attention is not paid to the ladies, we are determined to foment a rebellion, and will not hold ourselves bound by any laws in which we have no voice or representation.”

Being GUTSY means speaking out at the right time and in the right place and being brave enough to defy convention for the good of many.

Am I Worthless Because I Lost My Job?

How Did I Become My Mother?