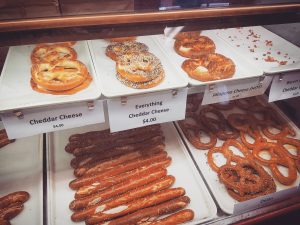 Getting into a twist isn’t always a bad thing, especially when making pretzels. And if you churned out knotted dough for over three decades, that twist came with a high measure of satisfaction.

Christmas Eve marked the end of the road for Barrett Township mainstay Callie’s Pretzel Factory, which began baking its deliciousness in 1985, just three miles south of an eponymous Candy Kitchen. It wasn’t long before pretzel-making turned into high art, with versions adhered to sticks, cloaked around hot dogs, and morphed into pizzas becoming in-demand staples.

“If you could imagine it, we made it,” enthuses Mark Reisenwitz, who, along with wife Gretchen, ran the Factory since day one. While he baked pretzels, she also worked at her late father’s candy store. “It was a crazy, but wonderful ride,” Callie-Reisenwitz adds.

Now, though, the couple is eyeing retirement in year-round warmth. “We’re moving to Florida, primarily because of the cold weather. Pennsylvania’s four seasons just aren’t appealing anymore,” Gretchen says. While Mark is sad about the Factory closing, he won’t miss his daily pace. “No more making pretzels anytime soon, or for a long time.”

They’ll always acknowledge the customers who sustained them, and are deeply grateful for their loyalty. “It has been a pleasure to provide residents and visitors of the Pocono Mountains with a wide variety of pretzels and popcorn,” the company announced on its Facebook page.

Callie’s Pretzel Factory also housed the “Lefty Shop”, a nook dedicated to left-handers. Here, a variety of items crafted specifically for southpaws, including scissors, mugs, notebooks, and potholders, were sold to lefties.

Gretchen’s sister will continue to oversee operations at the Candy Kitchen. “We’ve done this our whole lives, and have carried on in our parents’ memory as best we could,” says Callie-Reisenwitz.

“That place was an integral part of this community and beyond,” declares Jill Beacham, 52, of Cresco. “My family started buying pretzels from the Factory when I was a teenager. Of course, my own kids loved everything made there. That really is a long-standing tradition.”