SCRANTON, PA— From the Hollywood Glamour of the 1940s to the Red Carpet looks of today’s top designers, Sarno and Son has spent 75 years providing exquisite yet affordable formalwear for life’s most special occasions.

Sarno and Son Tuxedos is a name nearly everyone in Northeastern Pennsylvania has grown up knowing and trusting; a long cherished destination to choose looks for semi-formals, proms, weddings and other milestone events. To most Lackawanna County residents, it seems as though Sarno and Son has always been a part of the local vernacular, a landmark in the community.    But, did you know Sarno and Son services wholesale stores in over eleven states?

The Sarno family has suited men for their special occasions since Ralph Sarno, a master suit maker, immigrated to the United States from Italy in the 1920s and began practicing his trade.  In 1940, he founded Sarno’s Custom Tailor Shop on Washington Avenue in Scranton. The shop showcased the three basic styles of the time. As Ralph’s shop became more popular so did fashion, and the two expanded simultaneously to offer a variety of new styles.

Founded on principles of honesty, quality, and genuine care for the customer, Ralph’s business steadily grew, soon including alterations, dry cleaning, custom suit making, and tuxedo rentals. Ralph’s son, Larry, worked alongside Ralph learning the tailoring trade. Larry moved the tuxedo section to the front of the store, expanding selections and styles for the next generation’s needs while maintaining the traditions of quality and service.

By the late 1970s Larry built a chain of 11 stores extending from Williamsport to Syracuse, focusing on tuxedo sales and rentals. In 1972, Larry moved business operations to a large production facility on Blakely St. in nearby Dunmore. But his next move was to shift from a retail chain to a wholesale supplier of tuxedos, an endeavor Larry’s own son, Mark, continued developing upon joining the family business in 1978.

Then Sarno and Son became Sarno and Son and Daughter, at least in spirit, when Larry’s daughter, Nancy, joined the family trade in 1986. Since then, the business has expanded numerous times in a multitude of ways.

What began as an Italian immigrant’s small custom suit tailoring shop is now a thriving business in its third generation of family ownership. From its large distribution warehouse in Scranton, Sarno and Son serves a network of wholesale customers in eleven northeast states from Maine to Virginia. “Sometimes it feels like we’re the best kept secret in Scranton. Very few people realize how our service area has grown.” Says Nancy.

Far from the three basic styles offered in the ‘40s, Sarno and Son Tuxedo now offers over 75 looks from black tie to everyday suits. Today’s trends include Allure for Men, a modern tuxedo/suit hybrid look, as well as trim fit designs by Ike Behar and Michael Kors. Even “Skinny” styles. And then there’s color  – Greys, Tan, and Midnight Blue.

“Whatever color you can imagine for your prom gown or bridesmaid dresses, we can offer a complimentary vest and tie.” Kim Sladicki – Scranton store manager said. “After decades of long ties, the bow tie is back in fashion. It’s easy to personalize your look.”

Although fabrics and styling have varied through the years, Nancy notes one factor that has not changed is the dedication to the proper fit, a value instilled in all Sarno generations by its master-tailor founder.  Today’s casual dress code makes it hard for some men to know their sizes, it’s our job to insure they look wonderful and feel comfortable for their event.

“We have made many advancements as times and tastes have changed, but there are a few areas that will never budge, those being the values our father and his father instilled in us. We will always strive to provide quality products offered by skilled professionals, all in an honest and friendly environment. Ultimately, we want to see maximum customer satisfaction,” Mark Sarno commented.

Both Mark and Nancy credit the success of their family business to customer service, dedication to quality, and wonderful employees. Nancy describes the formalwear rental industry as “very dynamic.” “That means a commitment to predicting and planning for new trends, changes in the marketplace and innovation in technology.” Within the last decade Sarno and Son gained a national presence by joining the Savvi Formalwear co-op of independent tuxedo specialists. With this affiliation our Savvi by Sarno and Son stores can service groomsmen throughout the United States and Canada.

Last year, Sarno and Son purchased the wholesale division of Black Diamond Formalwear in New Jersey, expanding their services to the 17 Dante-Zeller stores in New York and New Jersey.  “It gives us great pleasure to be a part of so many celebrations throughout the Northeast U.S., Said Nancy. “We are honored to be a part of the weddings, proms, quinceaneras and other happy occasions in our customer’s lives.”

“We understand that our product is used for life’s celebrations, and will be captured in photos for generations to enjoy. With every Sarno and Son rental, our customers get the benefit of 75 years of experience.” added Mark.

Sarno and Son is planning several celebrations in honor of the business’s past, present and future. Details about the promotional contests, special pricing events and giveaways will be posted through the company’s social media and advertised regionally, stay tuned.

Sarno and Son Tuxedos is a men’s formalwear rental and sales business based in Scranton, Pennsylvania. With wholesale and retail locations throughout the Northeastern United States, Sarno and Son Tuxedos is the premiere choice for men’s upscale yet affordable fashion. The third-generation family business was established in 1940, and is celebrating its 75th anniversary in 2015. For more information, visit sarnoandson.com or savvibysarno.com. 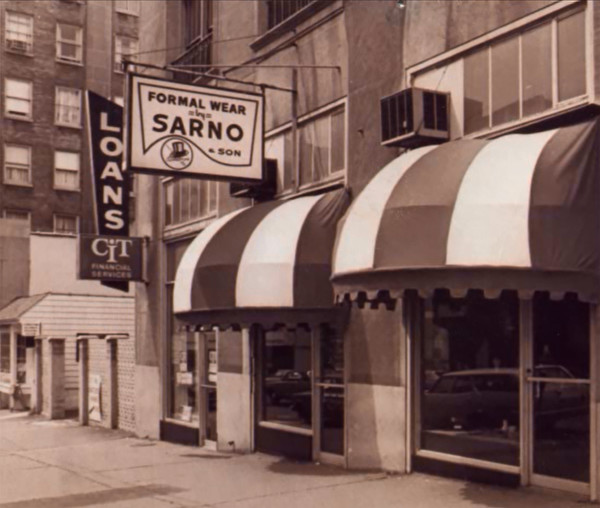