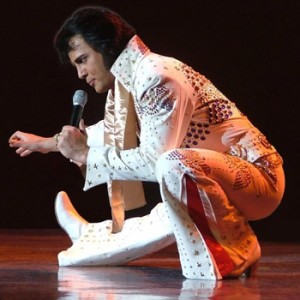 Bushkill, PA – It’s been more than 30 years since Elvis last performed live on stage, but his spirit will make a triumphant return to Pennsylvania when the Fernwood Resort in Bushkill, PA plays host to the first annual Pocono Mountains Elvis Festival, October 29-31, 2010.

“For the past few years we’ve been looking to transplant our festival to a larger, more cosmopolitan stage,” said Jason Sherry, president of Sherry Management, LLC, whose company has overseen the Lake George event since its inception in 2004.  “Our inaugural event in this market will feature the country’s finest tribute artists performing some of Elvis’ most beloved songs.”

To date, professional ETAs from all corners of the country and as far afield as England and Australia have signed up to appear.  Those taking part will perform 15-minute sets on both Friday and Saturday and will have their results from both nights tabulated to determine the overall winner.

“The competition we’ve put together will work out great for the fans,” said Tribute Artist Advisor Terry Collins, noting that all performers have experience playing at major venues in Las Vegas or Memphis. “The level of talent we’ve assembled will capture our fans’ hearts and give them a memorable show all weekend long.”

Besides the centerpiece ETA competition, fans will also be able to pick up tickets for Saturday night’s “Raised on Rock” show, which runs from 8-10:30 p.m. The performance features Ultimate Elvis Tribute Artist, Shawn Klush, performing a set of Elvis’ greatest hits.  The show will also feature Dwight Icenhower doing a tribute to Elvis’ earlier years.  Both Icenhower and Klush will be backed by the Change of Habit Tribute Band with the unforgettable Ronny Craig serving as the master of ceremonies.

“I’ve seen hundreds of ETAs perform across the country, but there’s only one person who makes me sit still for 90 minutes with my mouth open in amazement and that’s Shawn,” remarked Collins.  “He’s the complete package.  He has the vocals, appearance, stage presence and overall performance.  And that’s why he won Elvis Presley Enterprises’ first Ultimate Elvis Tribute Artist competition in 2007. ”

Other highlights on tap throughout the weekend include an extensive Elvis Collectibles sale, a Sunday morning Elvis Gospel Music Contest and After Hours events.  “For the first time ever were having a Halloween Costume After Hours Party on Saturday the 30th,”remarked Sherry.  “It should be an interesting night of fun and music.”

For those interested in obtaining a seat for Saturday’s “Raised on Rock” show and a pass to all the other festival activities, packages start at $65.  Tickets for only Saturday only start at $35.

Overnight accommodations are available at the Fernwood Resort and other hotels in the East Stoudsburgh area.   Book you reservation at Fernwood by calling the Fernwood Group Sales Office at (800) 528-5560 extension 4320 or 4321.  Or call 1-800-Poconos for other lodging options.

For more information, a complete schedule of events and to purchase your tickets, visit www.PoconoMountainsElvisFestival.com, or call (518) 681-7452.

Elvis Presley Enterprises, Inc. (EPE) is based in Memphis, with additional offices in Los Angeles. In addition to Graceland and its related attractions in Memphis, including the Heartbreak Hotel, EPE is aggressively involved in a worldwide licensing program, merchandising, music publishing, and television, film, video and Internet projects. For more information on EPE and Graceland, visit www.elvis.com . EPE is a subsidiary of CKX, Inc. (www.ckx.com), a publicly traded company listed on the NASDAQ Global Market® under the ticker symbol CKXE.