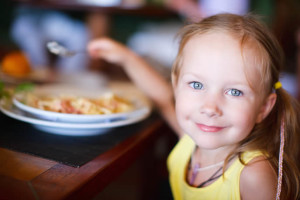 Families who dine-in at Applebee’s on Easter Sunday will receive up to two free kids’ meals with each adult entrée purchase. Children ages 12 and under can choose any entrée on the Applebee’s Kids’ Menu, accompanied by their choice of a side dish, and juice, milk or chocolate milk. With 26 menu items and more than 650 combinations of entrées, sides and beverages, the Applebee’s Kids’ Menu offers more Kids LiveWell – approved meals than any other national casual dining restaurant.

Applebee’s (www.applebees.com) is the world’s largest casual dining chain, with more than 2,000 locations in 49 states, 16 countries and one U.S. territory. Based in Lenexa, Kan., Applebee’s takes pride in providing a welcoming, neighborhood environment where everyone can enjoy the dining experience. Applebee’s Services, Inc., and its affiliates franchise and operate restaurants under Applebee’s Neighborhood Bar & Grill and are a DineEquity, Inc. (NYSE: DIN) brand.

Established in 1985, Doherty Enterprises, Inc. is recognized as the 68th largest privately-held business in the New York Metro area by Crain’s Business and the 10th  largest franchisee in the United States as ranked in the Restaurant Finance Monitor, operating eight restaurant concepts including: Applebee’s Neighborhood Grill & Bar, Panera Bread, Chevys Fresh Mex, Quaker Steak & Lube, Noodles & Company, IHOP, and two of its own concepts, The Shannon Rose Irish Pub and Spuntino Wine Bar and Italian Tapas. In 2015, Nation’s Restaurant News ranked Doherty Enterprises as the 78th largest U.S. Foodservice revenue company, up from 85 in 2014. To date, Doherty Enterprises owns and operates over 160 restaurants in northern, southern and central New Jersey, Long Island, Queens, Brooklyn, Staten Island, Florida and Georgia – including newly acquired locations in the Miami area. The Doherty vision is to be the “Best Food Service Company in the Communities We Serve” and its mission is to “Wow Every Guest Every Time, Wow Our People, Wow Our Communities and Wow Our Suppliers.” (www.DohertyInc.com).