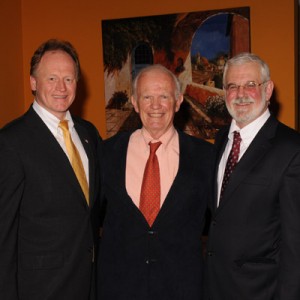 Attorney John Klemeyer presented a humorous and entertaining retrospective of his partner’s and friend’s career over the past many decades. Present at the testimonial dinner were his wife Sally Beecher and his five children: Sharon, Susan, Sanford III, Stacy and Sarah.

Bar President Elizabeth Erickson Kameen presented an award from the Pike County Bar Association which recognized Attorney Beecher for his dedicated service to clients of Pike County. Attorney Erickson Kameen stated that Attorney Beecher “has always been willing to help out with advice to any young lawyer who had the courage to ask. His kindness to others and willingness to always be there to pave the way for younger lawyers is the finest example anyone can set. He continues to practice law the way it was meant to be practiced having grown up in an era where a lawyer’s word was his bond.”

Erickson Kameen described Beecher, senior member of the bar, as the “Granddaddy of the Pike Bar and a remarkable man who captured the hearts and minds of an entire bar”. She said “the respect and admiration that this bar holds for you is immeasurable and it is with great honor that we celebrate your career and 50 years of actively practicing law in Pennsylvania. In those fifty years, you have seen the invention of the internet, the takeoff of social media from Facebook to Twitter, yet in spite of the change around you, you remain steadfast and grounded in your original principles which have acted like a guiding light to all those who have come after you. Personally and on behalf of the Pike County Bar Association, we take great pride in your accomplishments and look forward to many more years with you.”

The Resolutions from the State and Federal representatives highlighted Attorney Beecher’s long and dignified career and his consistent and continuing contributions to his clients and the local and state community and his commitment to the spirit of the law and the mission of the Commonwealth of Pennsylvania.