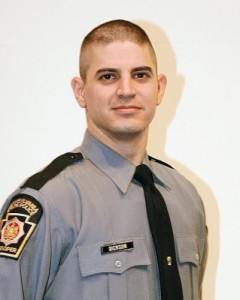 Dickson, who was a member of the Pennsylvania State Police assigned to the Blooming Grove barracks located along Route 402 about one mile from that interstate interchange, was shot and killed in the line of duty on Sept. 12, 2014, during an incident at that station. Trooper Alex Douglass was also shot and severely injured during the horrific event that led to a 48-day manhunt for the alleged shooter in Pike and Monroe counties.

Baker said that by naming the exit for Cpl. Dickson, motorists will always remember the Marine and trooper who bravely served his nation, state and community.

“We have a solemn obligation to the memories of those who lost their lives, to remember the pride, passion, and purpose with which they served,” Baker said. “We also have an obligation to the families, friends, and colleagues they left behind, to mourn what they have lost.”

Baker noted that the stretch of I-84 from the New York State line west to the junction with Interstates 81 and 380 was designated the “Fallen Trooper Memorial Highway” in 2011 after a bill she sponsored was adopted and signed into law. A monument placed at the Matamoras Welcome Center just off Exit 53 includes an inscription and the names of all Pennsylvania State Troopers killed in the line of duty.

“Whenever anyone drives along this stretch of Interstate 84, I hope they will be reminded of the sacrifices made by Cpl. Dickson and other members of law enforcement who put their lives on the line each and every day,” Baker added.