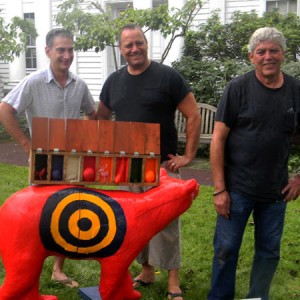 Milford, PA – The Black Bear Film Festival unveiled the 2012 Artful Bear Sculptures to the public in Milford last Saturday, August 11th, 2012 in the garden of the Milford Community House. The eleven bears and their artists met with community members on a beautiful summer morning to explain their backgrounds and the inspiration behind the bears that now decorate the streets of Milford.

This year’s bears, designed by local artists and sponsored by generous local businesses, range from serious-themed bears such as “Keith Bearing,” an HIV awareness bear, to playful bears resembling famous celebrities. No matter what the theme, these brightly-colored, eye-catching, and creative bears are a delightful embodiment of the cultural and educational ideals of the Black Bear Film Festival.

The first bear, titled “Jasper Johns’ Target Bear,” was designed by Phil Rachelson as an appropriation of one of Jasper Johns’ famous target paintings. Mr. Rachelson was born in Brooklyn in 1948 and studied at CCNY, where he received his BFA. He worked as a colorist for many years for both Marvel and DC comics, and has also taught art at the Hudson Valley River Museum and the Staten Island Museum. His work has been shown in galleries and art fairs in New York, Miami, Connecticut, Los Angeles, Chicago, and Amsterdam, and is in several private collections. He currently owns and operates The Forge Studio and Gallery in Milford, PA, where he shows work by contemporary artists and has his studio. He also exhibits his art in various other art spaces. For more information or to contact Mr. Rachelson, please email him at theforge1@verizon.net.

The Jasper Johns Target Bear was sponsored by Michael Elf and Frank Bonello of Shohola, PA and the Upper Mill Complex.

The Artful Bear Sculptures are a fundraising effort to support the 13th Annual Black Bear Film Festival, occurring this October 12-14th. The bears will be sold at a silent auction during the festival, so be sure to attend in order to get your paws on the “Jasper Johns’ Target Bear” or one of the other beautiful sculptures.

For more information on the Black Bear Film Festival or the Art Bears, please visit their website at www.blackbearfilmfestival.com, call their offices at 570-409-0909, or “like” them on Facebook.