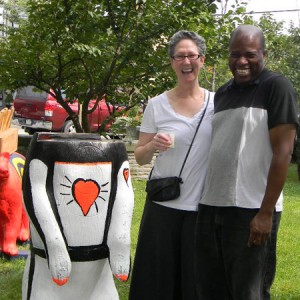 Milford, PA – The Black Bear Film Festival unveiled the 2012 Artful Bear Sculptures to the public in Milford last Saturday, August 11th, 2012 in the garden of the Milford Community House. The eleven bears and their artists met with community members on a beautiful summer morning to explain their backgrounds and the inspiration behind the bears that now decorate the streets of Milford.

This year’s bears, designed by local artists and sponsored by generous local businesses, range from serious-themed bears such as “Keith Bearing,” an HIV awareness bear, to playful bears resembling famous celebrities. No matter what the theme, these colorful, eye-catching, and creative bears are a delightful embodiment of the cultural and educational ideals of the Black Bear Film Festival.

The ninth bear, titled “Keith Bearing” was designed by local author, screenwriter, playwright, and editor Amy Ferris. The bear is a tribute to the AIDS & HIV epidemic, those who fought, passed away, or are currently surviving the disease. Ms. Ferris has written for both films and television, including Mr. Wonderful and Funny Valentines, the latter which was nominated for awards. Amy has contributed to numerous anthologies, including He Said What? (2011); Exit Laughing (2012); The Drinking Diaries (2012); The Buddha Next Door (2007), and the soon-to-be-released Dancing at the Shame Prom (2012), which she co-edited. Her memoir, Marrying George Clooney, Confessions from a Midlife Crisis (Seal Press 2010) is heading off-Broadway for the fall of 2012 and winter of 2013. Ms. Ferris serves on the faculty of the San Miguel de Allende Literary Festival and teaches memoir and non-fiction writing at UCLA (the Writers Extension Program). For more information or to contact Ms. Ferris, please visit her website at www.marryinggeorgeclooney.com.

The Artful Bear Sculptures are a fundraising effort to support the 13th Annual Black Bear Film Festival, occurring this October 12-14th. The bears will be sold at a silent auction during the festival, so be sure to attend in order to get your paws on the “Jasper Johns’ Target Bear” or one of the other beautiful sculptures.

For more information on the Black Bear Film Festival or the Art Bears, please visit their website at www.blackbearfilmfestival.com, call their offices at 570-409-0909, or “like” them on Facebook.