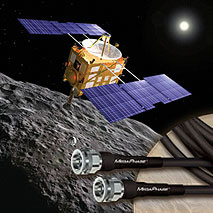 Stroudsburg, PA – MegaPhase cables have contributed to the first and only asteroid dust capture from space. Japanese scientists confirmed their Hayabusa space probe, equipped with MegaPhase’s GrooveTube® cable assemblies. The seven year mission captured particles from the asteroid Itokawa, which have been undergoing a wide variety of tests and analysis after returning to earth this past June.

“This is a world first and it is a remarkable accomplishment that brought home material from a celestial body other than the moon,” Yoshiaki Takagu, Japan’s science and technology minister, told a press conference called to announce the scientists’ findings.

MegaPhase’s GrooveTube® cable assemblies underwent rigorous testing including radiation, thermal shock and vibration to assure the 1,100 pound space probe would continue to function through its vast 186,411,358 mile journey – two times the distance between the earth and the sun.

“MegaPhase is very pleased to have gained successful space heritage on this state-of-the-art mission with our partners at NEC/Toshiba Space and our local sales engineers, SHOSHIN Company,” notes William Pote, CEO and founder of MegaPhase.

The Hayabusa is the only spacecraft designed to land on an asteroid and then take off again. Formerly known as MUSES-C for Mu Space Engineering Spacecraft C, the Hayabusa launched in May 2003 and rendezvoused with Itokawa over two years later in September 2005. The Hayabusa craft studied the asteroid’s shape, spin, topography, color, composition, density, and history. In November 2005, the probe landed on the asteroid and collected samples in the form of tiny grains of asteroidal material, which were finally returned to earth five years later in June 2010. The Japanese scientists hope that their research will provide new information about the birth of the solar system, more than 4.5 billion years ago.

JAXA’s tracking stations in Japan, as well as those of NASA’s Deep Space Network provided mission planners with near-continuous communications with the spacecraft keeping them informed on spacecraft health. Other spacecraft innovations included the four xenon ion engines and the Autonomous Navigation System that enabled the probe to approach a far-away asteroid without human guidance, the craft was also instrumented with Telescope Wide-View Cameras and Light Detection and Ranging, as well as with a Near Infrared Spectrometer.