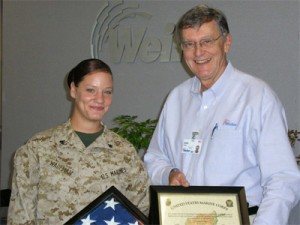 Earlier this month, Corporal Carrissa Wademan presented Weiler Corporation with a United States flag that was flown over the battlefields of Afghanistan on January 15, 2010.  Carrissa is the daughter of Glenn and Lisa Gertz.  Glenn works in the tool room at Weiler Corporation.

Accompanying the flag is a certificate from the United States Marine Corps confirming the flag was flown at Camp Leatherneck during decisive operations against enemy forces within Helmand Province of Afghanistan.

Corporal Wademan is currently stationed at Cherry Point, North Carolina as a Field Radio Operator and will remain with the Marine Wing Communication Squadron for another year.  Carrissa’s future plans in the military include becoming a drill sergeant. Shown in photo are Wademan (left) and Weiler Chairman Karl Weiler.