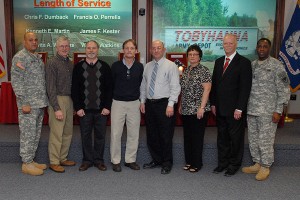 Tobyhanna, PA — Six Tobyhanna employees were recognized for their years of government service during the Jan. 19 Length of Service Ceremony.

In addition to service certificates and pins, employees with 35 years of service received an engraved mantel clock and those with 30 years received a framed American Flag that includes a photo of the depot signed by their coworkers.