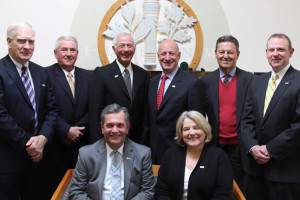 Honesdale, Pennsylvania/ May 4, 2015 – Dimeco, Inc. (the “Company”), the parent holding company of The Dime Bank (the “Bank”), held its 2015 Annual Meeting of Stockholders on April 23, 2015. The Company’s stock is traded on the over-the-counter (“OTC”) bulletin board under the symbol “DIMC.” The meeting was brought to order by Temporary Chairman of the Board Thomas A. Peifer. At the meeting Barbara J. Genzlinger, John S. Kiesendahl, and John F. Spall were reelected as directors, each for a three-year term. Stockholders also approved the Dimeco, Inc. Employee Stock Purchase Plan and ratified the appointment of S. R. Snodgrass, PC. as the Company’s independent auditors for the fiscal year ending December 31, 2015.

A report on the year 2014 was presented by President and Chief Executive Officer Gary C. Beilman. Mr. Beilman presented financial information for the past five years, noting that assets increased from $542 million in 2010 to $611 million at December 31, 2014. He expanded on loans, as they are the Company’s largest asset class, stating that the concentration remains primarily centered in commercial loans. Beilman then addressed asset quality issues including delinquency and nonaccrual loans. Although higher than the Company would like, both have shown improvement since 2010 and diligent efforts are continuing to reduce these areas. Beilman stated that the overall loan portfolio decreased slightly at year end 2014 over 2013 by $4.6 million as some customers continue to pay down debt while others wait for economic improvement before borrowing additional funds. Looking to the liability side of the balance sheet, Dimeco’s funding composition has remained consistent over time, with the primary source of funds being interest-bearing deposits. At December 31, 2014, deposits totaled $492 million, a slight decline of 0.7% from a year earlier. Dimeco’s management team is working to shift the concentration of deposits from time-bearing to noninterest bearing and this is reflected in a $32 million decrease in Certificates of Deposits, half of which were in brokered deposits. This being said, deposit market share numbers, as reflected in the FDIC’s annual report dated June 30, 2014, show that the Bank continues to hold the largest market share of deposits in the combined Wayne and Pike County marketplace and has held this ranking since 2007. The Bank opened a new office in August of 2013 in Lackawanna County and garnered almost $10 million in deposits in that market during the ten month period from August 2013 to June 2014.

The Company’s capital position has continued to increase each year as the balance sheet has grown, showing growth of $4.3 million at December 31, 2014 compared to a year earlier, and total growth of capital of $15.7 million or 31% more than at the end of 2010. This year, all financial institutions will fall into new regulatory rules for proper capitalization and the Company believes it is well prepared with capital at the current level.

Beilman continued with a discussion on the various components of income, stating that as is customary for community banks, the primary component of net income is net interest income. With the economy remaining at a low interest point, margins are being tightened. Interest earned on loans and investments is being booked at lower rates and is then offset by interest paid for deposits and other borrowings. Income derived from service charges had declined as customers have become more diligent in monitoring their accounts to avoid overdraft fees. Brokerage commissions continued to increase in 2014, with gross income of $1.3 million. The Company’s Wealth Management Department has created huge gains over the past five years. In 2010 the department had $117 million of assets under management. As of December 31, 2014, the amount increased to just under $225 million. The Company also realized income on sales of residential mortgages and through other categories such as interchange fees, earnings on bank-owned life insurance, safe deposit boxes, and other products. Looking at the uses of income, the largest expenses are salaries and employee benefits, which were $8.6 million for 2014. The Company continues to work diligently to control operating expenses and produced an efficiency ratio of 62% for 2014, outperforming the National Peer group ratio of 67%.  The National Peer Group is comprised of insured commercial banks with assets between $300 million and $1 billion as analyzed by the Federal Financial Institutions Examinations Council. 10.8% of the income generated was set aside as a provision for loan losses and $1.4 million was used to maintain properties that are currently for sale as part the Company’s efforts to improve asset quality. Taxes, professional fees and other expenses also offset income. Net income for 2014 was $5.5 million, with a return on average assets of .91% and a return on average equity of 8.56%. Comparing Dimeco’s performance against 47 other financial institutions in the mid-Atlantic region with assets between $500 million and $1 billion, Dimeco’s yield on earning assets, cost of funds, net interest spread, noninterest income, and return on assets were better than peer. The Company’s Board maintained dividends paid, paying out 44% of income earned. At this level the dividend yield was 3.87%.

Beilman then briefly discussed first quarter 2015 results which were published on April 23, 2015. He also explained the Employee Stock Purchase Plan. Lastly, he gave an overview of a new core deposit gathering strategy the Bank is introducing. The promotion of new rewards-based deposit accounts will begin over the next few weeks.

Beilman thanked all shareholders, the directors and staff, our customers, and the community at large. A question and answer period was held. At the conclusion of business, the session was adjourned and light refreshments were served.