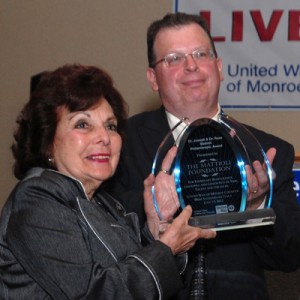 Tannersville, PA — The Mattioli Foundation is the first recipient of the Dr. Joseph and Dr. Rose Mattioli Philanthropic Award, which was unveiled at the United Way of Monroe County’s recent 70th Anniversary Gala.

“This is in recognition of all that Rose and Doc, and the Mattioli Foundation, have done for the United Way and this community to help those in need,” Sheptak said. “Their generosity has improved the well-being of thousands of lives and has directly benefited those who require assistance. We are so thankful, more than words can say,” Sheptak said.

The Mattioli Philanthropic Award was created to honor Dr. Rose and Dr. Joseph “Doc” Mattioli, who passed away in January. It recognizes an outstanding local individual or organization/business for their philanthropic work in “Uniting People and Improving Lives.”

Doc and Dr. Rose have been longtime supporters, advocates and friends of the United Way of Monroe County. They have been members of the United Way’s prestigious Alexis de Tocqueville Society for many years, with annual “Leadership Gifts” of $10,000. In 2010, Doc was “roasted” at a United Way fundraiser in his honor, which raised more than $100,000, including a $50,000 gift to the annual campaign.

“Because it’s a very special distinction, we will only present this award as deemed merited, rather than annually,” said Rogers. “And since this honors Doc and Rose’s legacy of philanthropy, a member of the Mattioli family will be involved in the selection process in coming years.”

The criteria for the new award include the following: donations of time, treasure and talent; benevolence and goodwill; passion and advocacy; and leadership and engagement. While the award primarily recognizes service to and support of the United Way, it also takes into account charitable efforts that benefit other nonprofits in the community.

Besides United Way of Monroe County, Doc and Rose have made major contributions to Pocono Medical Center, East Stroudsburg University, the downtown Stroudsburg beautification project, and Lehigh Valley Hospital. Their philanthropy is known throughout the region, just as their success with Pocono Raceway is known internationally. In 2009-10 alone, $1.6 million was donated to charitable organizations through the Mattioli Foundation.

In accepting the award, Dr. Rose said her family will continue to give back to the community, continuing the legacy she and her husband started. The Mattioli family also supports United Way through volunteerism and special events.

The United Way of Monroe County provides health and human services through community initiatives, support and funding to more than 30 local programs. Since 1942, the organization has been uniting people and improving lives in our community. It encourages people to advance the common good and Live United by giving, advocating and volunteering. For more information, visit www.unitedwaymonroe.org.