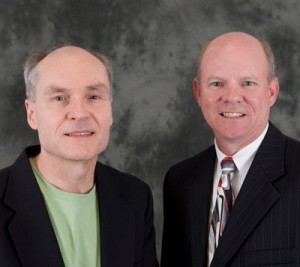 East Stroudsburg, PA – East Stroudsburg University’s Distinguished Professor Awards for 2010 were presented to Professor Patrick Dorian, professor of music, and Dr. John M. Hauth, professor of athletic training, at the ESU President’s All-University Meeting on Tuesday, September 7.  The awards, the highest faculty honor, recognize the excellence of superb faculty members and their outstanding contributions to the academic life of East Stroudsburg University in the areas of teaching, scholarship, creative endeavor, and service to the university or community.

Dr. Robert J. Dillman, university president, and Dr. Nancy VanArsdale, professor of English presented the awards.  Dr. VanArsdale is also president of the ESU Chapter of the Association of Pennsylvania State College and University Faculties (APSCUF).  Twenty-six professors have received the Distinguished Professor honors since the award was established in 2000.  Nominations for the award are reviewed by The Distinguished Professor Awards Committee comprised of six faculty and two administrators.  The committee then selects two award recipients annually.

A member of the music department since 1987, Professor Dorian has initiated nearly thirty new courses in jazz studies and music, most notably the Jazz Masters Seminar, which brings world class musicians to campus to discuss and play jazz for our students and community members.  Since 2003 Prof. Dorian has also authored a column called “From the Academy” in The Note, the official magazine of ESU’s Al Cohn Memorial Jazz Collection.  He has many other publications, including chapters in jazz anthologies, articles in jazz education journals, as well as liner notes for a number of jazz CDs by such notables as John Coates, Jr., Eric Doney, and Urbie Green.

Prof. Dorian is an active performer in his own right, playing both trumpet and flugelhorn.  He has played with the Phil Woods Big Band since 1997, performing at jazz festivals throughout the world, including the North Sea Jazz Festival, the Umbria Jazz Festival, and the Oslo Jazz Festival, among others.  He has been a member of the Dave Liebman Big Band’s trumpet section since 2000, performing at historic jazz clubs such as Birdland in New York City, Blues Alley in Washington D.C., and the Deer Head Inn in Delaware Water Gap.  He can be heard on two Grammy-nominated CDs:  Celebration! (by Phil Woods & the COTA Festival Orchestra) and Beyond the Line (by the David Liebman Big Band).  In addition to his jazz performances, he has played trumpet for many pop musicians and groups, such as Robert Goulet, The Temptations, the 5th Dimension, and the Lettermen.

Prof. Dorian earned his bachelor’s degree in music from Ithaca College and his master’s degree in music at Northwestern University.  He was promoted to full professor at ESU in 2008.  He has earned numerous awards for his contributions to jazz education, including the Outstanding Service to Jazz award presented by the International Association for Jazz Education.  He also received the Great Teacher Award from the ESU Alumni Association in 2007 and was the director of the Celebration Of The Arts (COTA) Cats student jazz ensemble for 20 years.

For over 25 years, Dr. Hauth has made significant leadership contributions to the discipline of athletic training at ESU and to the field on a state, regional, and national level.  At ESU, Dr. Hauth played a major role in the 2005 reorganization of the ESU academic departments that focus on athletic training, movement studies, exercise science, sport management and physical education; that reorganization has enhanced the university’s national reputation in the disciplines related to exercise and poised ESU to develop new programs for the new millennium.  Dr. Hauth now chairs the athletic training department which, in addition to a Commission on Accreditation of Athletic Training Education-accredited (CAATE) undergraduate program, has also developed an advanced clinical practice master of science program in athletic training.

Prof. Hauth has served as president of the Pennsylvania Athletic Trainers’ Society (PATS) and he has provided testimonial before the Pennsylvania Legislature regarding licensure for the profession in the Commonwealth.  He is also a leader and active member of the National Athletic Trainer’s Association (NATA), serving as program director and conference chair for its biennial Athletic Training Educators’ Conferences since 2005. He was appointed by the board of directors in 2008 to serve on the NATA’s Executive Committee on Education.

Prof. Hauth’s publications include co-authored articles in the Journal of Sports Medicine and Physical Fitness, the Journal of Athletic Training Supplement, and Medicine and Science in Sports and Exercise.  In addition, Dr. Hauth has made dozens of conference and workshop presentations.  His scholarly research includes studies on sports injury prevention; sports injuries related to specific sports including football, swimming, skiing; special topics related to children at summer sports camps and women athletes in high school and college; and sexual harassment issues in the field of athletic training.  He has helped the university obtain more than $400,000 in grants.

As a clinician-scholar, Dr. Hauth has been recognized for his evidence-based approach to practice and service to thousands of high school, college and recreational athletes. He received the “Varsity S Award” for his outstanding contributions to the ESU Athletic Program in his first year of service in 1985.  In 2009, he was inducted in the PATS Hall of Fame.  Prof. Hauth remains clinically active having recently served as the supervisor of athletic training services for track and field events at the XXI Central American and Caribbean Games in Mayaguez, Puerto Rico.

Photo Caption: ESU’s 2010 Distinguished Professor awards were presented to (from left) Professor Patrick Dorian and Dr. John J. Hauth at the President’s All-University Meeting on September 7. The awards are the university’s highest faculty honor recognizing outstanding contributions in the areas of teaching, scholarship, creative endeavor, and/or service to the university or community.