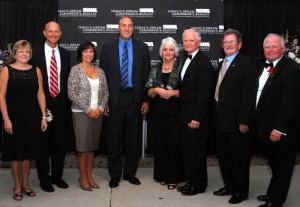 The celebration brought together major supporters of Today’s Dream, Tomorrow’s Reality, the Comprehensive Campaign of East Stroudsburg University, and heralded the milestones of the effort which surpassed its $15 million goal by 137 percent. In total, the first of its kind campaign for ESU received more than $20.5 million in commitments from alumni, friends and supporters of the University.

“How inspiring it was to see so many stakeholders gather at this beautiful event to celebrate this significant milestone – the largest Comprehensive Campaign in the University’s history,” said Frank Falso, president and CEO of the East Stroudsburg University Foundation. “Throughout the entire event, one could feel the spirit of philanthropy and so many attendees spoke of how contagious that spirit was during the entire eight-year campaign.”

ESU launched Today’s Dream, Tomorrow’s Reality in June 2003 after a meticulous assessment of its strengths and needs. Recognizing it could no longer rely on the Commonwealth to fully fund its initiatives, the University identified, and successfully surpassed its fundraising goals, in five key areas of focus within the campaign:

“We cannot thank the Niedbalas enough for their dedication to Today’s Dream, Tomorrow’s Reality. Their commitment of leadership, service and significant support for the Niedbala Auditorium helped bring this magnificent effort to a triumphant close,” said Falso. “Today’s Dream, Tomorrow’s Reality brought out the best in the ESU community, its alumni and friends. Through diligence and hard work, sight was never lost to the end goal – to improve the college experience for each and every student today, and those in the years to come.”

The mission of the ESU Foundation is to foster and promote the growth, progress and general welfare of East Stroudsburg University of Pennsylvania, and to solicit, receive and administer, and make gifts and donations for such purposes.