Representatives of Applebee’s Neighborhood Grill & Bar present a check for $113,000 to the U.S. Marines Corps in support of its Toys for Tots program. The funds were raised during Applebee’s annual Breakfast with Santa events held in New Jersey, in which 100 percent of the proceeds benefitted underprivileged children in local communities during the holiday season. Over the past 18 years, Applebee’s locations owned and operated by Doherty Enterprises in Florida, Georgia, New Jersey and Long Island – which donated a combined total of $264,723 as a result of its 2016 Breakfast with Santa fundraiser – have raised more than $4.1 million for the Toys for Tots initiative, helping to spread holiday cheer to over 230,000 deserving children.

Established in 1985, Doherty Enterprises, Inc. is recognized as the 68th largest privately-held business in the New York Metro area byCrain’s Business and the 11th  largest franchisee in the United States as ranked in the Restaurant Finance Monitor, operating seven restaurant concepts including: Applebee’s Neighborhood Grill & Bar, Panera Bread, Chevys Fresh Mex, Quaker Steak & Lube, Noodles & Company, and two of its own concepts, The Shannon Rose Irish Pub and Spuntino Wine Bar and Italian Tapas. In 2015, Nation’s Restaurant News ranked Doherty Enterprises as the 78th largest U.S. Foodservice revenue company, up from 85 in 2014. To date, Doherty Enterprises owns and operates over 160 restaurants in northern, southern and central New Jersey, Long Island, Queens, Brooklyn, Staten Island, Florida and Georgia – including newly acquired locations in the Miami area. The Doherty vision is to be the “Best Food Service Company in the Communities We Serve” and its mission is to “Wow Every Guest Every Time, Wow Our People, Wow Our Communities and Wow Our Suppliers.” (www.DohertyInc.com).

Applebee’s Grill & Bar brings together a lively bar & grill experience offering hand-crafted drinks and craveable, simple, American food with flare featuring vibrant flavors and real, fresh ingredients. All Applebee’s restaurants are owned and operated by entrepreneurs dedicated to serving their communities and offering the best in food and drinks with neighborly, genuine service. With more than 2,000 locations in 49 states, Guam, Puerto Rico and 15 countries, Applebee’s is one of the world’s largest casual dining brands. Applebee’s restaurants are franchised by DineEquity Inc.’s (NYSE: DIN) subsidiary, Applebee’s Franchisor LLC and its affiliates.

Toys for Tots, a 69 year national charitable program run by the U.S. Marine Corps Reserve, provides happiness and hope to disadvantaged children during each Christmas holiday season.  The toys, books and other gifts collected and distributed by the Marines offer these children recognition, confidence and a positive memory for a lifetime.  It is such experiences that help children become responsible citizens and caring members of their community.  Last year the Marine Corps fulfilled the holiday hopes and dreams of 6.8 million less fortunate children in 782 communities nationwide.  Since 1947 over 237 million children have been assisted. For more information, visit www.toysfortots.org. 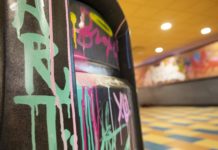