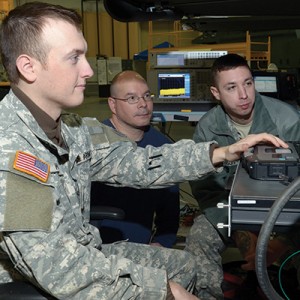 Tobyhanna, PA – Four National Guardsmen learned troubleshooting and repair procedures for a mission critical system to increase their readiness and improve their repair capabilities prior to deployment.

“Prior to coming to Tobyhanna, we only knew how to set up and power on the Phoenix,” said Spc. John Stevenson, 198th Expeditionary Signal Battalion, Delaware National Guard. “Now, we can troubleshoot the systems, find and fix problems without having to wait for a repair.” The ability to fix the systems themselves saves precious time in critical situations and can potentially save lives.

Stevenson will deploy later this year along with Spc. Joshua Hower, also of the 198th Expeditionary Signal Battalion. Hower said the training has provided him more confidence heading into theater.

“During our time here, we were surrounded by highly knowledgeable and experienced personnel who answered all of our questions,” he said. “We learned things we never would have gone over in a classroom-only training course. I’m confident that I’ll know what to do when my skills are called upon in the future.”

“This is, by far, is better than any training I’ve ever had,” said Murphy. “Training is usually convoluted with information you don’t ever use. Here we’re learning so many things that we can use in the field.”

The Soldiers spent time in a classroom learning the capabilities of the Phoenix as well as the test and validation procedures. After transitioning to more hands-on learning, the Soldiers experienced the highest level of maintenance training.

“We learned everything from the 10-level, which is operator-level maintenance, to the 50-level which is depot-level maintenance,” said Murphy. He added that the increased hands-on experience has encouraged him to learn more. “After seeing what Tobyhanna has to offer, I would love to come back and train on ground mobile forces satellite systems,” he said.

The Phoenix is a four-band SATCOM system used by the Army and Marine Corps. Depot personnel are developing repair and overhaul capability for the Phoenix and associated equipment. Between the four models, 156A through 156D, there are more than 100 Phoenix systems in operation.

Initially, when the depot received the AN/TSC-156B, depot technicians were set to troubleshoot the system and ship it back to the customer. After getting it up and running, electronics mechanics Robert Morgan (a resident of Covington Township) and David Zadzura (a resident of Dickson City) thought to look in the reserve center to see if there were any Soldiers who needed experience on the Phoenix. The reserve center located the four guardsmen and sent them to the depot for a three-week rotation.

“We weren’t supposed to come to the depot in the first place, so the experience has been more than we could have ever expected,” Hower said.

All four guardsmen agree the depot accommodated them better than any facility they have been to previously.

“Every person I’ve met at Tobyhanna was very welcoming,” said Doss. “The barracks and dining facilities exceeded all of my expectations.”

About 5,100 personnel are employed at Tobyhanna, which is located in the Pocono Mountains of northeastern Pennsylvania.  Tobyhanna Army Depot is part of the U.S. Army CECOM.  Headquartered at Aberdeen Proving Ground, Md., the command’s mission is to research, develop, acquire, field and sustain communications, command, control computer, intelligence, electronic warfare and sensors capabilities for the Armed Forces.