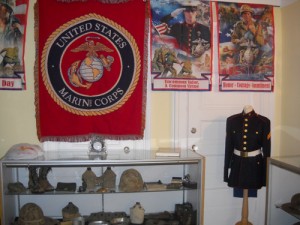 Milford, PA – The Pike County Historical Society (PCHS) is proud to announce the opening of a new and permanent exhibit dedicated to a very special branch of the military.  The Marines.

Although the Society’s Museum boasts several artifacts and information on the Civil War, there is no room specifically dedicated to any particular branch of the military until now.

The exhibit was initiated by Jack Ritter and Henry Czech, both retired Marines from the 909 Gung-Ho Attachment, via meetings with Lori Strelecki, Museum Director.  The Pike County Historical Society is proud to have worked with these two men in putting the exhibit together.

The exhibit was funded by a donation made in remembrance of Michael Billig, Past President of PCHS, who was a military man, although not a Marine, and dedicated tour guide at West Point, until his unfortunate passing earlier this year.  Friends of Michael Billig wanted a distinct way to remember him and felt a military exhibit was quite appropriate.  The Marines were happy to oblige.

The Marines have dedicated the room to all those who served, and it is a room of memories, some good and some bad, of men and women who left home and returned to become part of this community. They heard the call that has sounded since the 1700’s.

Pike County Commissioner’s Harry Forbes and Richard Caridi both served as Marines.  Mr. Forbes battled in Kashan, and Mr. Caridi was a “Mustang” Marine, which is an enlisted man who went on to PLC, then served as a Second Lieutenant.

Also included in the new exhibit is equipment used during WWII, Korea and Vietnam, which is commonly referred to as “782” gear.  All items on display have been donated by members of The Marine Corps. League, and have great sentimental value to the donors.

The Pike County Historical Society is proud to bring this exhibit to you, with the help of the Marines.  There will be a grand opening ceremony on November 20, 2010 from 6-8pm.  Please join us.  For more information please call 570-296-8126

or visit us online at www.pikecountyhistoricalsociety.org