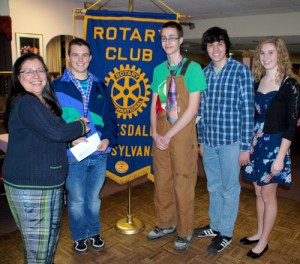 Honesdale, PA – The power of youth was on display at the Honesdale Rotary weekly meeting on February 21. Interact, the junior Rotary Club at Honesdale High School, presented a check for $700 to the End Polio Now campaign, a global initiative spearheaded by Rotary International. Interact members raised the money through direct solicitations and fun events like the “Purple Pinky Project” at last year’s Roots & Rhythm concert in Honesdale. Honesdale Rotary added $300 to make a $1000 total donation to Rotary International’s Polio Plus/End Polio Now fund. Since Rotary launched the campaign in the 1980s, the number of polio cases worldwide has been reduced from 350,000 to 627 as of January of this year. Rotary’s case has also been helped by Bill Gates, the founder of Microsoft, and his wife who have contributed more than $400 million to help the polio eradication effort. Rotary’s official polio challenge ends in June.

For more information about Honesdale Rotary visit www.honesdalerotary.com or, better yet, join them for lunch at Cordaro’s Restaurant, Honesdale, every Tuesday at 12noon.