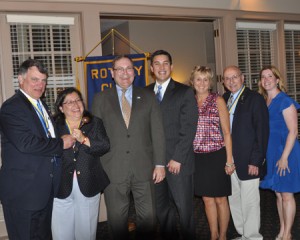 Honesdale, PA – Sylvia Kingston is the new president of the Honesdale Rotary club, a member of Rotary International which boasts more than 1.2 million members worldwide.  Kingston, a Human Resources executive at Highlights for Children, accepted the gavel from outgoing President John O’Reilly.  Quoting Benjamin Franklin, Kingston told the crowd of about 30, “Well done is better than well said,” and promised to be an active, hands-on leader.

Ken Doolittle, a manager at Wayne Bank in Honesdale, succeeds Kingston as vice president of the club, and Jordan Ubertini, who works for the financial company, Merrill Lynch, steps up as second vice president.  Andy Lane Chapman, owner of Four Leaf Clover Designs, a floral shop in Lake Ariel, assumes Ubertini’s prior post as Sergeant-at-Arms.  Kay Reynolds and Larry Caruth retained their posts, respectively, as secretary and treasurer.

Rotary International and the Honesdale Rotary club are comprised of business and professional leaders who commit to the Rotary motto, “Service Above Self.” In its 85-year history, Honesdale Rotary has spearheaded many local projects, including most recently helping Friendship House with breakfast needs, and participated in hundreds of global initiatives, such as a student exchange program and building a well for a village in Cameroon. Honesdale Rotary and its high school club, Interact, have also contributed time and energy to raising funds to eradicate polio from the planet.  Rotary International has helped reduce the cases of polio worldwide through immunization programs and monetary donations by more than 99% since 1988.

Honesdale Rotary welcomes new members. Visit honesdalerotary.com or come to a lunch meeting Tuesdays at 12 noon at Cordaro’s in Honesdale.  The Rotary is also on Facebook.