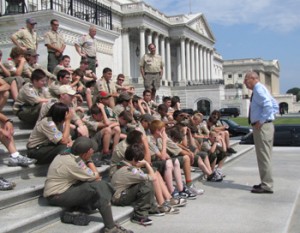 Washington, PA – Today, Congressman Paul E. Kanjorski (PA-11) met with the Tannersville Boy Scouts Troop 85 on the steps of the U.S. Capitol.  The troop is in Washington to visit the sites and monuments so that the boys could earn their “citizenship in the nation” merit badge.  The purpose of the badge is to help highlight what it means to be better citizens and help the country.  Congressman Kanjorski highlighted the importance of civic participation during their discussion.  The group, led by troop leader, Wayde Moloney, included 40 boys between 11 – 17 years old and 13 troop leaders.  On Saturday, they will attend the Boy Scouts National Jamboree which will celebrate the 100th anniversary of the Boy Scouts of America in Fredericksburg, Virginia.

“It is extremely valuable that these Boy Scouts are learning about the U.S. government and the importance of the democratic process at an early age,” said Congressman Kanjorski.  “During their visit to our nation’s Capitol, we discussed what happens in Congress and how each and every American has the ability to impact how our government is run and operated.  I applaud Troop 85 and its leaders for taking the time to spend a few days in Washington and learn the history of the U.S. and about our government.  Participating in the Boy Scouts increases their active involvement in their communities and the country.  It says a great deal about these young men that they chose to become Boy Scouts and start that participation at such an early age.”

Editor’s Note: Attached is a photo of Congressman Kanjorski speaking with Troop 85.