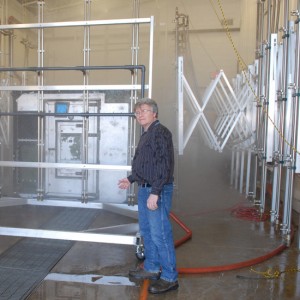 Kolment, a mechanical engineer, designed a Universal Rain Test Rack, pictured above, that was installed in the rain test facility. The system performs water-tight testing of vans, shelters and other equipment as required by the Army and Air Force, including Firefinder and Ground Theater Air Control radars, and electronic shelters and vans.

Thanks to its flexible hose and movable nozzles, the new Universal Rain Test Rack is capable of performing all of the existing water-tight testing requirements as long as the equipment can fit in the facility.

“Prior to installing the Universal Rain Test Rack, the depot had significant labor costs associated with the transportation, assembly and disassembly of multiple component racks,” said Wilkes-Barre resident Ron Scarnulis, industrial engineer in the Productivity, Improvement and Innovation Directorate’s Industrial Modernization Division.  “The depot is saving about $35,000 per year in labor because all of these steps are no longer necessary.”

Kolment also assists in a Total Productive Maintenance Program that focuses on avoiding costly production stoppages and adverse impact to the mission due to unplanned equipment breakdowns.