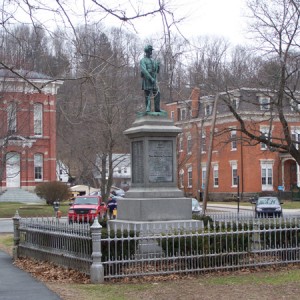 Honesdale, PA – The Leadership Wayne Class of 2011 has chosen to preserve the Civil War Monument in Honesdale’s Central Park as their group project.  This project is especially significant as 2011 marks the 150th Anniversary of the beginning of the American Civil War. The group has raised $2,900 so far and they still need your help! No donation is too small! Their fundraising goal is $40,000, which will allow them to do a complete preservation of the statue, base and fence. Upon completion of this project, the Leadership Wayne Class of 2011 plans to hold a rededication ceremony in Central Park.

Corporate Sponsors who donate $500 or more will have the option of a donation photo with press release, will receive mention at the Rededication Ceremony, and be listed in a ‘Thank You’ Ad to be run in The Wayne Independent.  If you would like to contribute, please make checks payable to WCCC-Leadership Wayne and mail to:

Photo Caption:  The Civil War Monument located in Central Park, Honesdale will undergo preservation during late summer 2011 under the direction of the Leadership Wayne Class of 2011.  The group is hoping to raise $40,000 to complete this project.