Harrisburg, PA – In an appearance before the House Appropriations Committee on Thursday, Rep. Rosemary M. Brown (R-Monroe/Pike) told committee members about the lack school funding from the state for the past 20 years and how that is affecting the overall quality of life in Monroe and Pike counties.

During her testimony, Brown reported that schools in her area receive much less state funding than other schools with similar demographics – primarily because of the hold-harmless provision where no school district can receive less state financial support than the previous year. That funding formula essentially punished school districts that had rapid population growth, like those in Monroe and Pike counties.

“I want to see our school districts get what has been rightfully theirs during the last 20 years,” Brown said. “The crippling effects of this funding formula – that was never adjusted based on school population and other factors – hit us especially hard and well before the economy weakened. It is about time the Commonwealth, this Legislature and governor do what is right and fair.”

Brown asked for a detailed review of the education funding to her districts and an adjustment this year along with a plan of allocation over the next few years to compensate for poor management.

She strongly encourages school districts to better prioritize and bear more responsibility for the decisions they make.

“Our school districts and school boards must propose and adopt fiscally sound budgets and they must do their best to work within tight financial constraints,” she said. “Skyrocketing school taxes have crippled the area, not only for residents on their tax bills but they have hindered our ability to attract and retain businesses.”

“This downward cycle continues as business entrepreneurs look at our area, see the higher cost of doing business based on their local tax bills and look somewhere else,” Brown continued. “This then takes away a key piece of our puzzle to offering not only jobs to residents but additional tax revenue that would alleviate some of the residential burden of taxes on the people. Three pieces of the puzzle – fair funding from the Commonwealth, critical spending habits of school districts and increased business revenue – all need to work together to help give our residents relief and allow them to stay in their homes.”

Brown also used the opportunity to relay her concerns about proposed 20 percent funding reductions for mental health and disability services, funding reductions for hospital services that would affect Pocono Medical Center and the State System of Higher Education, of which East Stroudsburg University is a member.

“As a result of these many concerns I have with the budget proposal, I cannot support the current framework,” Brown said. “I believe the budget proposal needs much more work before it can earn my support and that includes making sure our schools are treated fairly in terms of an improved funding formula and making right the state funding that was denied to us over the last 20 years.”

Video footage of Brown’s testimony is available at this link or by clicking the image below: http://www.youtube.com/watch?v=Go98e-2408U&feature=colike 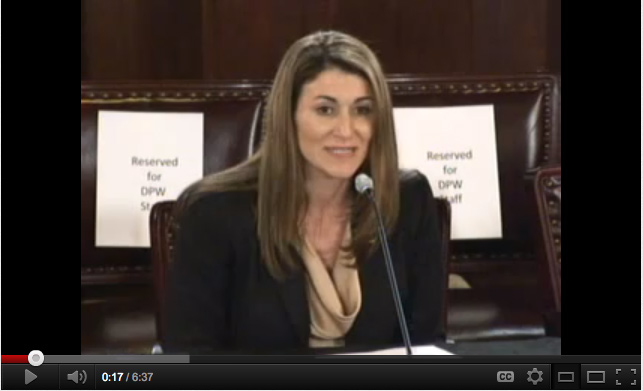