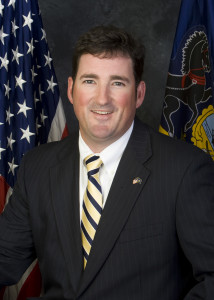 HARRISBURG – Rep. Mike Peifer (R-Pike/Wayne) today announced that he will serve on the House Appropriations, Game and Fisheries, Finance and Transportation committees for the 2017-18 legislative session. Peifer was also named chief deputy whip for the House Republican Caucus.

Now in his fifth term, Peifer will bring his expertise as a certified public accountant to the House Appropriations and Finance committees. The Appropriations Committee is tasked with drafting an annual budget proposal, hearing testimony from state agencies regarding their budgetary issues and reviewing proposed legislation to determine its fiscal impact, while the Finance Committee oversees matters relating to taxation and fiscal policy, investment of the Commonwealth’s money and regulations of the Department of Revenue.

“Crafting our state budget is the single most important task of the Legislature, and I appreciate the opportunity to have a role in the process,” said Peifer. “As we have seen, the budget process can be tedious, but it is critical that we keep taxpayers at the forefront of all discussions and I look forward to continuing this valuable work.”

Peifer will remain on the House Game and Fisheries Committee, which examines issues of particular significance to the 139th Legislative District. With an active sportsmen community in Wayne and Pike counties and thousands of acres of state game lands, Peifer’s presence on the Game and Fisheries Committee will allow him to advocate on behalf of area sportsmen and sportswomen.

Last session, Peifer worked with area lawmakers and PennDOT officials to use repurposed millings for the resurfacing of Interstate 84, and hopes to spearhead similar efforts this session with other roads in need of repair in Wayne and Pike Counties through his role on the House Transportation Committee.

Peifer was selected by Republican Caucus Whip Bryan Cutler (R-Lancaster) to serve as the chief deputy whip for the 2017-18 legislative session.

Deputy whips have a variety of responsibilities on and off the House floor, including facilitating awareness of member positions on pending bills and helping to advocate on key legislative issues. They also keep the majority whip advised of concerns that members may have and other matters potentially impacting the legislative agenda and the majority caucus as a whole.