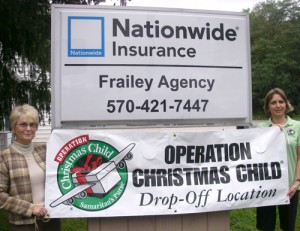 Frailey has been personally involved in packing shoe boxes for 15 years and has been in her current role as a Community Relations Coordinator (CRC) for the past 5.  As a CRC, she has coordinated local participation at events such as the West End Fair, Carbon County Fair, Light in the Park & a Family Movie event at Pocono Community Theater.  She has also received support from local groups such as scout troops, women’s groups, and service clubs such as Kiwanis.  In the Southern Pocono Area which is comprised of Monroe, Carbon, Pike and Northampton Counties approximately 11,500 boxes were collected last year.

“If you need a shoe box, I will have a limited supply in the Agency’s lobby.  People just have to come in get a shoe box, fill it with items and return it no later than November 15, 2011. I really like this project because everybody can participate from groups to individuals.” stated Frailey.