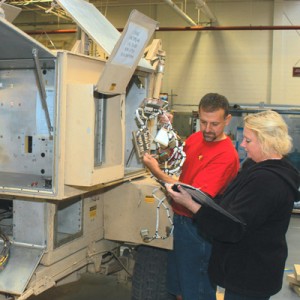 The radars are similar to the Army’s AN/TPQ-36 Firefinders.

“They have a different GPS (Global Positioning System), for example,” says Frank Balish, mechanical engineer (a resident of Roaring Brook Township).  “Other differences are very minor.  They are essentially the same system.”  Balish works in the depot’s Production Engineering Directorate.

The TPQ–46, like the TPQ–36, is towed by a Humvee and performs the same mission: detecting and back plotting enemy artillery, mortar and rocket rounds to locate the source.  The U.S. military has been using Firefinder since the 1980s.

Tobyhanna has been repairing and testing the TPQ–36 and 37 since 2002 and is now working on the first two Marine Corps Firefinders.

The mission was transferred from the Marine Corps Maintenance Center Barstow, Calif., to Tobyhanna Army Depot due to Base Realignment and Closure decisions made in 2005.

“The biggest difference between what we do for the 36 and the 46 is that for the 36 we refurbish the ATG (Antenna Transmitter Group) and the shelter and Humvee,” Balish said.  “For the 46, we will be working on the complete system, consisting of the ATG and shelter/Humvee, plus generator trailers, equipment trailers and other system–related Humvees.”

Technicians in the Counterfire Division will repair and test the ATG and shelter electronics, said Tim Higgins, chief of the Production Management Directorate’s Counterfire Branch (a resident of Moosic).

The Systems Integration and Support Directorate will reintegrate trailers and Humvees that will be repaired at Letterkenny Army Depot.

“This mission will follow the same standard for the AN/TPQ-36 Reset process, which was a recipient of the Shingo Gold Prize for Lean manufacturing in 2007,” said Joseph Raymer, electronics engineer in the Production Engineering Directorate (a resident of Moosic).

Each system costs about $950,000 and the depot will receive more systems for fiscal year 2011, said Amy Ciprian, logistics management specialist, Counterfire Branch (a resident of Dunmore).

Once the systems are repaired and tested, each will be tested again for Marine Corps representatives here, then shipped back to its respective Marine Corps unit.

CAPTION:  Felicia Wolverton (a resident of Effort), electronics worker, and Ray Silveri (a resident of Plains), electronics mechanic, inventory a wiring harness component of the first of two Marine Corps AN/TPQ–46 Firefinder radars to arrive for Reset at Tobyhanna Army Depot.  Both work in the depot’s Counterfire Division.  Tobyhanna will repair several of the systems into fiscal year 2011.   (U.S. Army photo by Anthony Ricchiazzi)