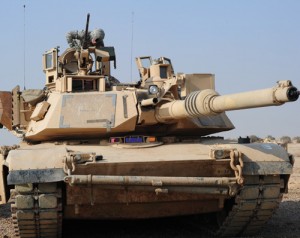 Stroudsburg, PA – MegaPhase’s founder and CEO, Bill Pote, joined General Dynamics-Land Systems and many influential constituents March 26-27 at the Abrams Tank Industrial Base 2012 Supplier Conference in Washington, DC, to support sustainment efforts for the General Dynamic’s Abrams Tank Program. The efforts to advocate Abrams, Bradley and Stryker armored vehicles protects one of the last mainstays of true American manufacturing jobs, including hundreds of well paid workers in 16 Congressional Districts in Pennsylvania alone; there are also thousands of jobs at stake in Ohio, Michigan, Florida and Alabama.

Secretary of Defense, Leon Panetta, has initiated a plan for the US Army’s “temporary break” in Abrams tank (M1A2-SEP) production from 2014-2017, consequently jeopardizing thousands of jobs that support the Abrams tank program. Abrams production accounts for tens of thousands of jobs at 882 suppliers and subcontractors across the United States. Nearly two-thirds (64 percent) of those suppliers are small businesses, including MegaPhase. A four-year break in production will cost the Department of Defense up to $1.6 Billion in termination liability.

The Abrams Tank Industrial Base 2012 Supplier Conference hosted by General Dynamics-Land Systems emphasized the critical need to maintain vitality of the industrial base to avoid a devastation of 18,000+ jobs lost and an accumulative $3.4 Billion in lost income. Bill Pote, founder and CEO stresses the need for this program to persist. “We have supplied General Dynamics with rugged assemblies for Abrams, Stryker and Bradley for several years and of course my primary responsibility is to protect the hard working employees on the MegaPhase Team,” Pote deliberates.

“This program shut-down is emblematic of the Obama Administration’s obtuse view of US manufacturing, particularly heavy industries such as armored vehicles. These production lines require more than a year to ramp-up, fine-tune and then qualify for combat,” Pote explains. “We cannot ‘turn off’ production one month and then ‘turn on’ production a few years later with the same result. There are scores of experienced American craftsman that work on these lines, and the bigger picture is our National Security is in jeopardy by thinking this is possible. We simply cannot outsource the fundamental technology for our Armed Forces. It’s not fair to the Warfighter or the taxpayer.” Pote considers potential threats in Iran, North Korea and other theaters of operation to be the reason for continued tank production and force modernization.

Key Elements of the M1A2 Abrams:

About MegaPhase — MegaPhase is an industry leader and innovator in design, manufacturing and marketing of coaxial cables for radio frequency RF and microwave applications through 70 GHz. The Company’s unique GrooveTube® Technology features a Copper outer conductor designed to maximize phase stability and durability. MegaPhase test & measurement products feature vertically-targeted cable assemblies and adapters used for telecom, semiconductor, spacecraft and C4ISR test sets using vector and spectrum analyzers, probe stations in addition to environmental and EMC test chambers. MegaPhase is the leading provider to the US Army’s PM Electronic Warfare, US Navy AWACS E-2D, CEASAR, Advanced Hawkeye and many other high-profile programs. Founded in 1998, the company is headquartered in Stroudsburg, Pennsylvania, with a management system certified to ISO-9001:2008.

Image Caption (Image is attached):
Break in Abrams M1A2 tank production to cost hundreds of Pennsylvania manufacturing jobs. The Abrams M1A2 tank in the photo was taken in Hammer, Wasit, Iraq, on Jan. 10, 2011, while a U.S. Soldier with 1st Squadron, 3rd Armored Cavalry Regiment (ACR) prepared the tank for firing practice rounds at the Besmaya Range Complex at Forward Operating Base. The 3rd ACR was deployed to Iraq in support of Operation New Dawn. (U.S. Army photo by Spc. Charles M. Willingham/Released)