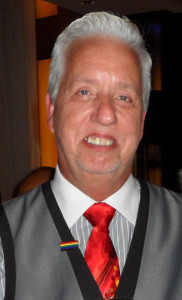 Cary J. Giacalone, Secretary/Treasurer of the Upper Delaware GLBT Center (UDGLBT), based in Milford, PA received the NEPA Rainbow Alliance’s Outstanding Community Volunteer Leader Award.  Cary was one of the honorees at this year’s Northeastern Pennsylvania Rainbow Awards Gala held on April 26th at The Woodlands Inn, Wilkes Barre, PA.  Other honorees included State Representative Phyllis Mundy, Beth Hartman, The Woodlands Inn and Family Service Association of NEPA.
Cary joined the UDGLBT in January 2012 as Secretary/Treasurer and Chair of the Planning Committee.  He is a fierce advocate and strong force behind programming that empowers and supports LGBTQ and Ally youth.  He facilitates P3, People Promoting Pride; the UDGLBT’s youth group where he is a supportive role model, a sounding board and a source of constant praise and acceptance.  He coordinates transportation and funding annually to ensure any youth that want to attend the NY Heritage of Pride Parade in New York are able to do so.  In 2012 he spearheaded Over the Rainbow and in 2013 the Mad Hatter’s Tea Party, extremely successful proms for both adults and teens.  Attendees enjoyed a special night where they and their relationships were celebrated and where they received full acceptance and support from the greater Milford community.
Cary has been instrumental in fund raising and has planned many other successful events, including, The Laugh Tour, UDGLBT Pride Weekend and the Share Your Heart dance which for three years has raised money for the Church of the Good Shepherd & St. John the Evangelist Ecumenical Food Pantry.
Cary worked in the Banking industry for over 38 years where he had varied roles including Branch Manager, District Manager, Sector Sales Manager, Trainer, Public Relations Officer, etc.  Each of these roles have been integral in his helping the UDGLBT meet its mission.
Cary worked the phone bank and was a buddy to HIV/AIDS clients with the Long Island AIDS Project, one of the first HIV programs on Long Island.  In addition he facilitated Gay Circles, a weekly men’s support group and volunteered as a peer counselor at Identity House, both located in New York.  He was also a member of the Marketing Committee for United Way of Long Island and chaired other successful philanthropic events.
Cary says he lives his life by what is a spiritual motto for him; there but by the grace of God go I.   He feels blessed to be the father of three children and four grandchildren.  Cary and his husband, Kris Jarmann, moved to Milford in 2010 and love being part of the vibrant and accepting community they have found here.  For the last two years they have also volunteered for the Milford Black Bear Film Festival.  His last thought on his award was “Change the World, Volunteer and Make a Difference!
The Upper Delaware GLBT Center is a private, non-profit 501(c)(3) organization that provides services to the Gay, Lesbian, Bisexual, Transgender and Queer community and Allies in an effort to support, empower and encourage acceptance.  Additional information is available at www.udglbt.org or by writing to admin@udglbt.org.