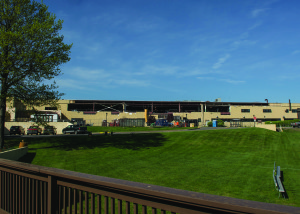 TOBYHANNA ARMY DEPOT, Pa. — Work to close a “missing link” in Tobyhanna’s modernization plan has begun in Building 1A. The five-phase plan includes an infrastructural overhaul of the building’s water, electrical, heating and sewer systems. The first three phases of the project has kicked off with the demolition of walls in the north office areas and will be followed by the enclosure and mezzanine, estimated to finish in 2017.

Dunmore resident Peter Moore, mechanical engineer in the Installation Services Directorate, said that each phase will focus on problem areas identified by the depot over the last decade.

“Since Building 1A was built in the early 1950s, we have made many facelifts but no really major changes to the infrastructure,” he said. “Through surveys and site assessments, we identified the need to modernize the area to position ourselves for future workloads while maintaining a high quality of work environment.”

Tobyhanna has been authorized $56 million by the Army Materiel Command (AMC) for the modernization project, which has an estimated price tag of $46 million. Moore said the remaining funds will be reserved in the event of unforeseen costs, but any unused money will be relinquished back to AMC.

The final two phases of the project include creating a cafeteria space in the current Test, Measurement and Diagnostic Equipment area, and renovation of the Guardrail section behind the enclosure. Both phases are slated for completion in late 2018 or early 2019.

“Tobyhanna is constantly trying to stay ahead of the curve,” said Moore. “We want people to see our state-of-the-art facilities and recognize our effort to serve the warfighter as best as we can.”

Tobyhanna Army Depot is a recognized leader in providing world-class logistics support for Command, Control, Communications, Computers, Intelligence, Surveillance and Reconnaissance (C4ISR) Systems across the Department of Defense. Tobyhanna’s Corporate Philosophy, dedicated work force and electronics expertise ensure the depot is the Joint C4ISR provider of choice for all branches of the Armed Forces and industry partners.

About 3,100 personnel are employed at Tobyhanna, which is located in the Pocono Mountains of northeastern Pennsylvania. Tobyhanna Army Depot is part of the U.S. Army Communications-Electronics Command. Headquartered at Aberdeen Proving Ground, Md., the command’s mission is to research, develop, acquire, field and sustain communications, command, control computer, intelligence, electronic warfare and sensors capabilities for the Armed Forces.