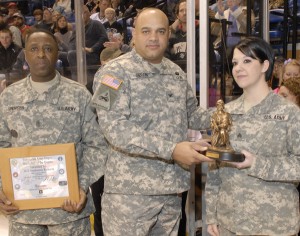 The quarterly award recognizes military personnel for outstanding service and is designed to strengthen bonds between the Tobyhanna Army Depot work force and the military personnel they support. The ceremony honoring Richards took place before the start of the Wilkes-Barre/Scranton Penguins game at the Mohegan Sun Arena Feb. 25.

“It is very humbling,” said Richards. “I understand that receiving this award is a very prestigious event and I’m very appreciative that my leadership thought of me.”

According to her supervisor, 1st. Sgt. Kevin Bittenbender ( a resident of Montgomery), Richards’s courage and wealth of knowledge and experience are just a few of the qualities that make her deserving of the award.

“She has been one of our ‘go-to’ NCOs because of her tactical and technical expertise,” said Bittenbender.

Richards deployed to Iraq from 2008 to 2010 as the senior intelligence analyst. While there, Richards maintained various intelligence databases and worked with other coalition allies and agencies to ensure the information she analyzed was accurate.

While deployed, Richards also prepared intelligence documents while dealing with high levels of stress in a combat zone, an experience that helped reinforce her goals.

“At first, I was a little afraid of deploying. Once things settled down and became more routine, I was excited because I knew the experience would help me in the future,” said Richards. “What I didn’t expect is how far it would take me.”

In addition to being actively involved as an NCO through schooling, company events, military training and active duty missions, Richards finds time to volunteer for the Coaldale Borough as the deputy code enforcement officer, a position she has held for over five years. She also lends her time to the community working as the deputy animal control officer, deputy health inspector and VFW post commander.

Lars commends Richards for her tireless efforts to put others first.

“All of her accomplishments and endeavors were done without complaints or concerns for personal benefit,” said Lars. “She always places her Soldiers, the Army and the mission above herself and serves as a model to those who take the time to notice her efforts.”

Richards is grateful for the opportunities she has been given and the skills she has gained.

“I’ve acquired many skills through the military. Confidence in public speaking is definitely one of them,” she said. “Self-discipline, as well, but I think the most important is teamwork.”

Richards remarked that very few jobs or careers are based on individual performance. The ability to work as a team not only benefits us in the business world, but in our personal relationships as well, she added.

“The people you meet and share experiences with really help in shaping you into the kind of person or Soldier you want to be,” she said. “I’ve gained confidence, self-discipline and have learned how to effectively work as a team member.”

Her advice to other warfighters: “No matter how insignificant you think your decisions are, they have the potential to affect every aspect of your life, so choose wisely.”