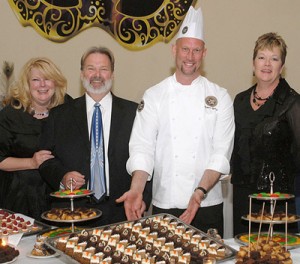 About The Inn at Pocono Manor

The Inn at Pocono Manor resort www.poconomanor.com blends a century of hospitality with the demands of 21st Century travelers.  Lovingly referred to as the “The Grand Lady of the Mountains” and a National Registry of Historic Places property, The Inn at Pocono Manor opened in 1902 as a country retreat for Philadelphia Quakers.  Today it is the oldest continuously running Resort in the Poconos and one of the oldest in North America.  The all-season resort boasts 237 guestrooms, and 25,000 square feet of flexible meeting and event space that can accommodate up to 500 guests.  The Exchange at Pocono Manor restaurant features superb dining with an eclectic flair.  The Old Lamplighter Lounge serves specialty beverages and pub fare throughout the day.

Complete recreational amenities are available at The Inn at Pocono Manor, including signature golf, horseback riding, ATV trail rides, indoor and outdoor swimming pools, the luxurious Laurel Spa, fishing, clay shooting, cross country skiing, and more.  Striking views of the Pocono Mountains are visible from all sides of the resort’s main building.  Complimentary wireless Internet is available throughout.  The Inn at Pocono Manor features two 18-hole signature golf courses, including the East Course dating to 1912, which was redesigned by Donald Ross in 1927 and has been host to golf legends like Sam Snead, Arnold Palmer and Jerry Barber.  In 1959, the George Fazio-designed West Course opened.

A destination within the Poconos for over a century, the 3000-acre Inn at Pocono Manor is minutes away from Crossings Premium Outlets, Camelbeach Water Park, Camelback Ski Mountain, and the Mt. Airy Casino.   The Resort is within two hours of New York City, New Jersey and Philadelphia.