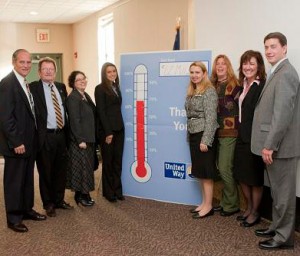 Tannersville, PA — Sanofi Pasteur, the United Way of Monroe County’s single largest contributor has announced the total funds raised through its 2010 United Way employee campaign, once again demonstrating how its donors are every day heroes helping their community.

Sanofi Pasteur’s traditional holiday announcement came the day before Thanksgiving during the United Way’s weekly campaign report meeting, held at Northampton Community College in Tannersville. United Way contributions from Sanofi Pasteur and its employees are consistently the largest from any single entity in Monroe County. The news drew applause from the many volunteers, board members, dignitaries, business representatives, partner agencies and community members in attendance.

The results of the campaign were unveiled by members of Sanofi Pasteur’s 2010 United Way leadership team: Cathy Kacprzycki, deputy director, clinical operations, North America, study management and logistics; and Julie Diorio, manager, filling and packaging planning, US materials management, co-chairs for the campaign, who shared the announcement with the packed audience.

According to Kacprzycki, “This role has taught me about the myriad of notable activities that take place in this community each day, which enhance the quality of life for tens of thousands of local residents.”

Kacprzycki also thanked The United Way, “for all you do to help ensure these programs have the staying power to survive even the most challenging times, and enjoy a lasting legacy for future generations to embrace.”

At the Swiftwater site, a superhero campaign theme set the stage for coordinating music, balloons, giant sized decals and raffles. To qualify for one of the key giveaways, Sanofi Pasteur employees completed a questionnaire that focused on the accomplishments of the United Way of Monroe County and its partner agencies. This approach gave contributors more insight into how their donation positively impacts lives in the community.

“Every year you amaze us with your generosity and commitment to Live United through your giving, advocating and volunteering,” said Pat Ross, 2010 campaign chair for the United Way of Monroe County. “You have truly made our Thanksgiving extra special and we thank you for all that you do.”

The next public meeting of the 2010 United Way campaign is set for Wednesday, Dec. 8, at 8 a.m. at Northampton Community College’s Monroe campus. For more information, visit www.unitedwaymonroe.org or call 570-629-5657.

About the United Way of Monroe County – The United Way of Monroe County provides health and human services through community initiatives and funding to 35 local programs. Its targeted need areas include Engaging Youth, Meeting Basic Needs, Helping Children Succeed and Promoting Self-Sufficiency. “Live United” is part of the United Way’s new mission of giving, advocating and volunteering to produce lasting changes in the community and advance the common good.