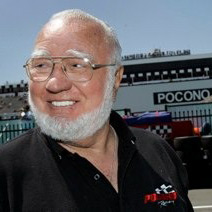 Tannersville, PA – Pocono International Raceway owner and philanthropist Dr. Joseph “Doc” Mattioli will be the honoree at a gala Celebrity Roast to benefit the 2010 United Way of Monroe County campaign. The celebration will take place on Wednesday, Oct. 20, at Paradise Stream Resort on Route 940 in Mount Pocono.

The black tie optional fundraiser begins with a cocktail hour at 5:30 p.m. and dinner at 6:30 p.m. The roast and feting will start at 7:45 p.m. Reservations to attend and/or roast Doc are now being accepted by the United Way.

As CEO and chairman of the board at Pocono Raceway, Dr. Mattioli has been the driving force behind its dramatic growth.  From its inception in the 1960s until today, Pocono Raceway has grown to the level that the raceway’s NASCAR Sprint Cup Series events are among the largest single-day spectator sporting events in the Commonwealth of Pennsylvania.

Besides being an extremely successful businessman, Dr. Mattioli is a community advocate and longtime friend of the United Way.  He is a member of the prestigious Alexis de Tocqueville Society and Leadership Giving Circle.

“Doc is so loved by our community and this evening will be a memorable tribute,” said Pat Ross, 2010 campaign chair for the United Way of Monroe County. “The roasting will give his friends and colleagues a chance to poke a little fun at him. We expect many people from the business and NASCAR communities to attend, as well as Pocono leaders, dignitaries and his family members,” Ross added.

In addition to the United Way, Dr. Mattioli is active in a number of civic and charitable associations. He serves as president and chairman of the board of the Mattioli Foundation. His philanthropic contributions include $1 million for the trauma center at Lehigh Valley Hospital/Health Network, $1.5 million to Pocono Medical Center for the Mattioli Emergency Wing, $1 million to East Stroudsburg University and $1 million for the downtown Stroudsburg beautification project.

Dr. Mattioli and his wife, Dr. Rose Mattioli (a retired podiatrist, who serves as secretary/treasurer/director of Pocono Raceway) have three children, seven grandchildren and two great-grandchildren.

The cost to attend the United Way’s Celebrity Roast is $125 per person or $1,000 for a table of eight. Guests can roast “Doc” for a donation of $100 per minute. Advertising opportunities in a commemorative program booklet are also available. Visit www.unitedwaymonroe.org or call 570-629-5657 for more information.

Special guests are planning to be part of the event, including NASCAR President Mike Helton, who is tentatively expected to attend.

About the United Way of Monroe County: The United Way of Monroe County provides health and human services through community initiatives and funding to about 35 local programs. Its targeted need areas include Engaging Youth, Meeting Basic Needs, Helping Children Succeed and Promoting Self-Sufficiency. “Live United” is part of the United Way’s new mission of giving, advocating and volunteering to produce lasting changes in the community and advance the common good.