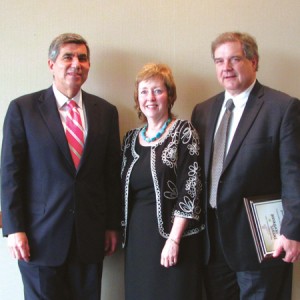 Michael Pacyna, senior vice president, PNC Bank, was nominated to continue to serve as an at large board member filling a two-year term .

John Cognetti recognized outgoing board chair, Charles Leonard, executive director, Monroe County Industrial Development Authority for his leadership as chair and presented to him a token of appreciation for his service.

Outgoing board member Michael Dziak was recognized for his years on the board and his leadership on the executive committee, the marketing committee and the nominating committee, where he served as chairman.

Penn’s Northeast’s President Penny Cannella stressed the importance of a regional business attraction effort in today’s economy. She reviewed the organization’s accomplishments over the past year. Some of the highlights included:

– An international marketing effort that involved working in collaboration with PA Office of International Business Development (OIBD). 13% of Penn’s Northeast leads came through the OIBD office in 2011/2012.

– Hosting various special events that bring prospects to northeast Pennsylvania, showing them the many amenities the region has to offer.

For a copy of the Penn’s Northeast 2012 annual report that more thoroughly outlines the organization’s accomplishments over the past year, please call 570-883-0504.

Penn’s Northeast’s mission is to market Northeast Pennsylvania as a region on a national and international level, encouraging businesses to relocate from other areas, and assist in the growth and development of existing businesses. Visit www.pennsnortheast.com for more information.