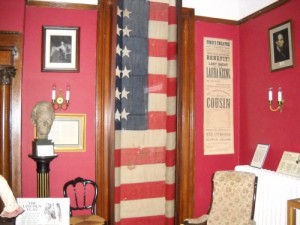 Milford, PA – For eight days in April, 10th through the 17th, of 2011, the Lincoln Flag of the Pike County Historical Society (PCHS) will be on loan to President Abraham Lincoln’s Cottage in Washington D.C.

Located on a picturesque hilltop in Washington, DC, President Lincoln’s Cottage at the Soldier’s Home is the most significant site directly associated with Lincoln’s presidency aside from the White House.  President Abraham Lincoln and his family lived there for a quarter of his presidency, from June to November of 1862, ’63 and ’64.  It was during his first season there that Lincoln drafted the preliminary Emancipation Proclamation.

The plans for the Lincoln flag to make this trip were created back in August of 2010, when the Pike County Historical Society’s executive director and a board member went to Washington D.C. at the invitation of John A. Miller, Senior Master Sgt., United States Air Force, Retired.  Sgt. Miller toured with the Pike County Historical Society representatives and they had several meetings at Lincoln associated sites.  The end result is a visit to the Lincoln Cottage and Armed Forces Retirement home for the blood stained flag.

Callie Hawkins, Curator of the Lincoln Cottage, is preparing for the flags visit by scheduling Lincoln author James Swanson to speak at a very special event called “Cottage Conversations” during the flags visit.

The journey to Washington, DC is approximately 260 miles one way.  Local business, Mahon’s Moving and Trucking, will be transporting the flag, donating their time and services.  The Society is requesting members of our community to sponsor a mile of the trip with a $10 donation.  Names of sponsors will be filled in on a road map depicting the monumental trek and displayed at the Historical Society.

The Lincoln Flag originally came from Washington, DC, which is what makes this trip so significant.  It was used to cradle the dying President Abraham Lincoln’s head at Ford’s Theatre the night of his assassination.  It made its way to Milford at the hand of Jeannie Gourlay who was an actress in the play being performed that evening. She was given the flag by her father, Thomas, when she married and moved to Milford in 1888.  She lived here until her death in 1924.  Her son Vivian Paul Struthers inherited the flag and donated it to the Pike County Historical Society in 1954.

“The Society is very excited about the flag’s upcoming journey and the fact that it will be in Washington for the anniversary of Lincoln’s assassination.  Although a somber occasion, the chance to share this rare and significant link to Lincoln is certainly an honor.  It is one thing to view the flag here in Pike County during this time, but certainly much more poignant for it to be so close to where the tragedy actually occurred.”  Lori Strelecki, Museum Director, PCHS.

The Columns Museum, located at 608 Broad Street in Milford, Pa., is open Wednesday’s, Saturday’s and Sunday’s from 1-4 pm.  For more information call 570-296-8126 or visitpikecountyhistoricalsociety.org.