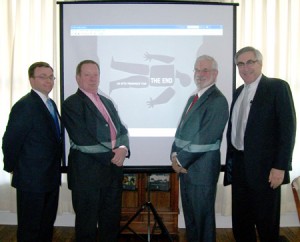 Milford, PA – The Pike County Bar Association (PCBA) recently held a live Continuing Legal Education (CLE) program “Anatomy of a Murder” at the Hotel Fauchere in Milford, PA. PCBA President and program facilitator Elizabeth A. Erickson Kameen, Esq. indicated that the faculty, consisting of Pike County President Judge Joseph Kameen, Pike County District Attorney Ray Tonkin, Pike County Chief Public Defender D. Benjamin VanSteenburgh and Pike County Public Defender Michael Weinstein (former Pike County District Attorney) comprised a highly qualified group of capital trial attorneys. Under Pennsylvania Rules of Criminal Procedure, Rule 801 requires an attorney to meet educational and experiential criteria before participating in a case in which the district attorney has filed a “Notice of Aggravating Circumstances,” as in Capital Murder cases. In those cases, an attorney must be a Pennsylvania attorney in good standing, an active practitioner with 5 years criminal litigation experience and have served as lead or co-counsel in a minimum of 8 significant cases. A minimum of 18 hours of training relevant to representation in capital cases as approved by the Pennsylvania Continuing Legal Education Board is required during the 3 year period immediately preceding the appointment. Vital training topics including the relevant law, pleading and motion practice, pretrial investigation, preparation, strategy, jury selection, trial preparation, presentation of scientific, forensic, biological and mental health evidence, ethical considerations and counsel’s role throughout were topics addressed at the CLE.

Erickson Kameen thanked the presenters for sharing their expertise with fellow bar members. The movie “Anatomy of a Murder,” shown as part of the Continuing Legal Education program, is based upon the novel written by John Voelker, the actual defense attorney in the 1952 Michigan case upon which the movie is based, where Lt. Coleman Peterson shot Mike Chenoweth, owner of the Lumberjack Tavern for the alleged rape and beating of Peterson’s wife Charlotte. During the CLE presentation, the movie was stopped several times to allow for extensive discussion of key legal points along with similarities and differences between the movie and Pennsylvania law. Key portions of statutory law were dissected and discussed in an open forum. Former District Attorney Weinstein brought a unique perspective to the educational course by discussing the differences in his role as District Attorney versus his current position as Public Defender. The packed room of attendees listened intently as Judge Kameen and District Attorney Ray Tonkin reviewed factors considered in death penalty cases. Through extensive experience, Public Defenders VanSteenburgh and Weinstein offered information regarding mitigating factors in death penalty cases. Chief Public Defender D. Benjamin VanSteenburgh noted that in Pennsylvania, the finding of a mitigating factor would decrease the murder charge and therefore reduce the punishment time but would not allow for an outright dismissal of the charges as in the movie. In Northeast Pennsylvania, Attorneys VanSteenburgh, Weinstein and Tonkin along with Judge Kameen rank high relative to combined Capital Murder trial experience. The Pike County Bar Association praised these leaders for volunteering their time to perform a vital public service. PCBA President Erickson Kameen, Esq. indicated that “a great service is provided to the public by Continuing Legal Education of attorneys. In Pennsylvania, attorneys are required to take 12 hours of Continuing Legal Education each year. We are proud of the members of the Pike County Bar Association for their public service including providing and receiving education to remain current on the ever changing laws.”