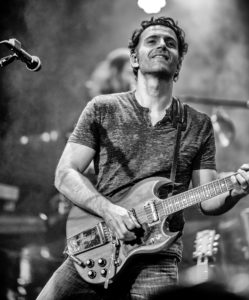 February 28, 2017 (Wilkes-Barre, PA) – For the fourth time in the past five years, Dweezil Zappa will take the stage of the F.M. Kirby Center, this time bringing his Cease And Desist tour to Wilkes-Barre on Thursday, August 3 at 8:00 p.m.

Zappa toured under the banner Zappa Plays Zappa for 10 years before changing the name to Dweezil Zappa Plays Frank Zappa last summer amid legal disputes between the guitarist and the Zappa Family Trust over trademarks and music licensing.

As the family feud over copyright infringement rumbles on, Zappa is now performing his father Frank’s music under the banner of the Cease and Desist tour – also known as “Dweezil Zappa Plays Whatever the Frank He Wants.”

“I understand there may be some public confusion about all of this,” Zappa said in a recent blog post.  “Multiple name changes etc.  I also understand that this drama may be a turn off to people.

“At the end of the day, I believe my father’s music deserves to be heard not silenced. I will now be playing it with an even stronger resolve than ever before under the name my father gave me – Dweezil Zappa.”

Around that same time, Dweezil Zappa cocooned himself away in the studio engineering his own metamorphosis, and the result was a series full-fledged tours honoring his father’s music and memory.

Prior to his August 3 performance, the Kirby Center will host the “Dweezil Zappa Guitar Master Class – Dweezilla on the Road!”

For the price of a fuzz pedal, guitar enthusiasts can learn techniques from the son of Frank Zappa via a 60-minute lesson that includes an open forum and demonstrations of techniques and improvisational strategies.

The $75 master class will take place in the Kirby Center’s lower level art gallery beginning at 3:00 p.m.  Please note that the lesson does notinclude a ticket to that night’s concert.

Dweezil brought his Zappa Plays Zappa tour to the Kirby Center in 2012 and again in 2014.  He also performed at the theater in 2014 as part of the Experience Hendrix tour.