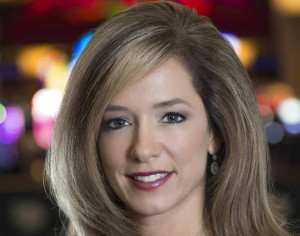 La Center, Wash., – January 27, 2016 – The Cowlitz Indian Tribe, in collaboration with their partner, Mohegan Sun, announced today that Kara Fox-LaRose has been appointed General Manager of the Cowlitz Project, the $500-million-dollar casino project that will be the West Coast’s premier gaming, dining, entertainment and meeting destination. With over 20 years of gaming and hospitality experience, Fox-LaRose will be responsible for day-to-day operations of the facility slated to open in spring 2017.

“We’re thrilled to appoint Kara Fox-LaRose to General Manager of the Cowlitz Tribe’s project,” said Bill Iyall, Chairman, Cowlitz Tribe. “She is a highly accomplished professional with deep experience in the gaming and entertainment industry, and we’re looking forward to having her leadership here in Southwest Washington. Her expertise in entertainment marketing, operational leadership and community building will be an incredible asset to our work here to advance the economy and vitality of the community.”

In her most recent role, Fox-LaRose served as Assistant General Manager of Mohegan Sun Pocono (MSP), in Wilkes-Barre, Pennsylvania. Named one of ‘America’s Best Employers, 2015’ by Forbes, MSP was Pennsylvania’s first casino, opening in November 2006, and exceeding the Commonwealth’s expectation in revenues and profitability.  She was directly responsible for the planning and execution of a multi-million-dollar expansion that introduced a hotel, convention center, spa and lobby bar in 2013. In addition to being named one of Northeastern Pennsylvania Business Journal’s ‘Top 25 Women in Business,’ Global Gaming Business Magazine also recently named Fox-LaRose one of their 2016 ‘25 People to Watch.’

“Kara’s experience in various levels of management throughout her career at Mohegan Sun has readied her for this opportunity to lead the Cowlitz Tribe and Mohegan Sun in our joint effort to establish a premier entertainment and meeting destination,” said Bobby Soper, President of Mohegan Tribal Gaming Authority (MTGA). “Her holistic appreciation of the business makes her the ideal candidate to introduce to the project the optimal business management practices that Mohegan Sun has to offer its valued partners.”

Over the next few months, efforts will be focused on developing the property’s brand, establishing the executive management team, securing retail and dining vendors and connecting with the community.

ABOUT THE COWLITZ TRIBE

The Cowlitz Tribe, headquartered in Longview, Wash., is a federally recognized tribe with over 4,000 tribal members. Since 2015, the Cowlitz Tribe has 152 acres of reservation land in Southwest Washington. The tribe is proud to provide health and human services to its tribal members, from housing assistance to education scholarships to award-winning health programs. More information is available by visiting www.cowlitz.org.

ABOUT THE COWLITZ PROJECT

The Cowlitz Project will be a premier entertainment, dining and meeting destination in the Pacific Northwest. Located in the heart of Southwest Washington off of the I-5 La Center exit, the 368,000-square-foot casino resort will include 100,000 square feet of gaming space, over 15 restaurants and retails shops, and eventually a 2,500-seat entertainment venue. More information is available by visiting www.cowlitzcasino.com.

The Authority is an instrumentality of the Mohegan Tribe of Indians of Connecticut, or the Tribe, a federally recognized Indian tribe with an approximately 595-acre reservation situated in southeastern Connecticut, adjacent to Uncasville, Connecticut. The Authority has been granted the exclusive authority to conduct and regulate gaming activities on the existing reservation of the Tribe, including the operation of Mohegan Sun, a gaming and entertainment complex located on an approximately 185-acre site on the Tribe’s reservation. Through its subsidiary, Downs Racing, L.P., the Authority also owns and operates Mohegan Sun Pocono, a gaming and entertainment facility located on an approximately 400-acre site in Plains Township, Pennsylvania. MTGA also manages Resorts Hotel and Casino in Atlantic City, New Jersey. More information about the Authority and its properties can be obtained by visiting www.mohegansun.com, www.mohegansunpocono.com or www.mtga.com.

Mohegan Sun, owned by the Mohegan Tribal Gaming Authority, is one of the largest, most spectacular entertainment, gaming, dining and shopping destinations in the United States. Situated on 185 acres along the Thames River in scenic southeastern Connecticut, Mohegan Sun is home to three unique casinos, a 34-story, 1,200 room luxury hotel, a world-class spa and golf course, over 75 shops, restaurants and bars as well as three award-winning entertainment venues including a 10,000-seat Arena. Mohegan Sun is within easy access of New York, Boston, Hartford and Providence and located 15 minutes from the museums, antique shops and waterfront of Mystic Country. More information is available by calling 1.888.226.7711 or visiting mohegansun.com. Connect with us on Facebook, follow us on Twitter and view us on YouTube.