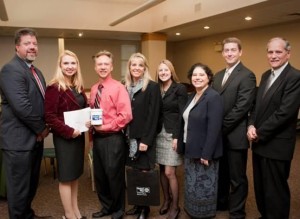 Tannersville, PA – United Way of Monroe County campaign volunteers gave a big pre-Thanksgiving “thank you” to Sanofi Pasteur today for raising $314,388 to help those in need, from children to seniors.

Sanofi Pasteur kicked off its successful campaign in September with a “Carnival of Caring” theme and a tagline of “Give today, change someone’s tomorrow.” A carnival-like atmosphere was created, with games, music, balloons, giveaways and cotton candy, popcorn, ice cream and roasted nuts.

A world leader in the vaccine industry, Sanofi Pasteur continues to be the United Way’s largest single contributor for Monroe County in terms of workplace donations. Sanofi Pasteur matches 50 cents on the dollar for all United Way employee contributions. Of the total amount raised, $275,720, or 88 percent pledged, will be credited to the Monroe County campaign, with the remaining dollars going to other communities where Sanofi Pasteur employees work and live.

Thanks to this gift and other donations, the United Way of Monroe County’s campaign is now at 50.7 percent of its $1.2 million goal, with $608,700 raised to date.

“Time and again, Sanofi Pasteur proves how generous its employees are to our community and how much they care about making a difference,” said United Way 2011 Campaign Co-Chair George Roberts. “They set such an example for others to follow and we are so appreciative — more than words can say,” added fellow Co-Chair Connie Roberts. “The caring atmosphere they created during their carnival kickoff was contagious.”

The pre-Thanksgiving announcement has become a tradition during each United Way campaign, with contributions from Sanofi Pasteur and its employees consistently being the largest from any single entity in Monroe County. The news drew applause and a standing ovation from the many volunteers, board members, dignitaries, business representatives, partner agencies and community members in attendance.

The Carnival of Caring kickoff helped engage people and get them involved. Employees learned first-hand about the nonprofit’s partner agencies and funded programs by completing a special United Way bingo card. According to Bricco, this gave contributors more insight into how their donation positively impacts lives in the community.

“You have truly made this Thanksgiving extra special and we thank you for all that you do,” George Roberts said to Sanofi Pasteur’s team.

Besides fundraising announcements, the meeting featured the distribution of frozen turkeys for those in need. Associates from Walmart Distribution Center 6080 in Tobyhanna donated 24 turkeys for the clients of United Way partner agencies.

The next public meeting of the 2011 United Way campaign is set for Wednesday, Nov. 30, at 8 a.m. at Northampton Community College’s Monroe campus. For more information, visit www.unitedwaymonroe.org or call 570-629-5657.

About the United Way of Monroe County
The United Way of Monroe County provides health and human services through community initiatives and funding to 33 local programs. Its targeted need areas include Engaging Youth, Meeting Basic Needs, Helping Children Succeed and Promoting Self-Sufficiency. “Live United” is part of the United Way’s mission of giving, advocating and volunteering to produce lasting changes in the community and advance the common good.