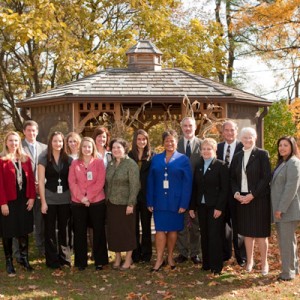 Delaware Water Gap, PA – Victims of domestic and sexual violence often need a peaceful healing space to help pick up the pieces of their lives. Thanks to a donation of a gazebo from Sanofi Pasteur in Swiftwater, the clients, staff and volunteers of Women’s Resources of Monroe County will now enjoy serenity offered in an outside garden area.

Employees of Sanofi Pasteur recently joined representatives from the United Way of Monroe County and Women’s Resources to officially present the solid wooden gazebo. The facility will be used to assist in combating traumatic situations experienced by survivors of domestic violence and by those who help them.

Five gazebos, valued at $5,000 each, have recently been donated as in-kind gifts to United Way partner agencies. In addition to Women’s Resources of Monroe County, the structures were given to The Growing Place, Equi-librium, Pocono Services for Families and Children, and Boy Scouts of America.

“This is a fitting time to present this gazebo,” said Dale Parisi, United Way board member and vice president of human resources for Sanofi Pasteur U.S. and commercial operations in Latin America, as he noted that October was Domestic Violence Awareness Month. “We are pleased to raise awareness of this critical time for Women’s Resources and of the United Way of Monroe County’s annual campaign,” he said.

“We are extremely grateful to Sanofi Pasteur and the United Way for offering this gazebo, which adds serenity to the Frances Hughes Crisis Counseling Center,” stated Jennifer Grube, executive director of Women’s Resources of Monroe County.

Representatives from Sanofi Pasteur who attended the presentation included the company’s United Way campaign chairs, Julie Diorio and Cathy Kacprzycki, and vice chairs Angie Bricco and Patrick Jenkins. The company will be reporting on its 2010 campaign results the day before Thanksgiving.

United Way Board Member Jamie Keener thanked Sanofi Pasteur for the gazebo donations and the company’s generous contributions during the campaign. He noted that the five partner agencies are using the gazebos for purposes such as counseling, education, relaxation, art projects and outside activities.

About the United Way of Monroe County
The United Way of Monroe County provides health and human services through community initiatives and funding to 35 local programs. Its targeted need areas include Engaging Youth, Meeting Basic Needs, Helping Children Succeed and Promoting Self-Sufficiency. “Live United” is part of the United Way’s new mission of giving, advocating and volunteering to produce lasting changes in the community and advance the common good.